Pretransplant crossmatch (XM) testing is widely used for detecting preformed donor-specific antibodies (DSAs) against human leukocyte antigen (HLA). However, in some cases, there is a positive XM result in the absence of HLA-DSAs, the cause of which was rarely identified. We reviewed the causes of sequential positive XM results at a single center and analyzed the presence of non-HLA antibodies in patients with an unexplained positive pretransplant XM result. Among 251 patients with T-cell/B-cell complement-dependent cytotoxicity (CDC) or flow cytometric crossmatch (FCXM) positivity, HLA-DSAs were confirmed in 88 (35.1%) by a single antigen bead (SAB) assay, 150 (59.8%) used rituximab (anti-CD20), and 13 (5.2%) had neither HLA-DSAs nor a desensitization history. Anti-angiotensin II type 1 receptor IgG and 33 non-HLA antibodies were tested in the 13 patients with an unexplained positive pretransplant XM result, and more than one non-HLA antibody were revealed in all these patients; 11 patients had non-HLA antibodies reported to be associated with graft rejection, and two patients experienced rejection episode after kidney transplantation. Our study suggests considering non-HLA antibodies testing when a CDC or FCXM test is positive without a definite cause. Assessing non-HLA antibodies might be useful for interpreting XM results and evaluating immunologic risk in transplant recipients.

Cell-based physical XM testing, including complement-dependent cytotoxicity (CDC) and flow cytometric crossmatch (FCXM), remain the fundamental techniques for predicting the risk of rejection prior to organ transplantation. The main cause of a positive XM result is the presence of preformed antibodies that recognize and react specifically to donor HLA molecules [1, 2]. However, there are other factors that cause positive XM result in the absence of donor-specific antibodies (DSAs). HLA-DSAs are detected through a sensitive single-antigen bead (SAB) assay; however, other low-level DSAs, allele-specific antibodies, HLA-DSAs from recent allosensitization, and antibodies against HLA antigens not contained in the assay beads can be missed by this test. The therapeutic antibody rituximab, which is frequently used for desensitization prior to organ transplantation, can also lead to positive B-cell XM results in the absence of HLA-DSAs [3]. In addition, autoantibodies and non-HLA antibodies can cause a positive XM result [4]. The presence of non-HLA antibodies, such as antibodies against angiotensin II type I receptor (AT1R), has been reported to produce a positive FCXM result and has been associated with allograft failure in transplant patients [5–8]. As non-HLA antibody-mediated rejections have been increasingly reported, the importance of non-HLA antibody detection in pretransplant XM testing has been recently emphasized [5,9-13].

Despite the occurrence of positive XM results in the absence of HLA-DSAs and the fact that possible causes of this occurrence can only be explained for some patients, transplant laboratories rarely evaluate the presence of non-HLA antibodies in pretransplant XM test samples. We reviewed the causes of sequential positive XM results at a single center and analyzed the presence of non-HLA antibodies in patients with an unexplained positive pretransplant XM result.

This study was carried out from February 2020 to May 2020, and a total of 1,638 XM tests conducted in Seoul St. Mary’s Hospital, Seoul, Korea, between January 2017 and February 2020 were enrolled. The XM results and clinical features of patients were determined by review of electronic medical records. Among them, 371 tests (22.6%) showed a positive result in one or more XM tests, including T-cell/B-cell CDC and FCXM. If multiple XM tests were performed for the same donor and patient pair during the observation period, the first positive result was included for analysis. Exclusion criteria were repeated test results from a single donor-recipient pair (N=51), patients without donor HLA typing results (N=64), and patients with only FCXM or CDC results (N=5). Finally, we focused on 251 patients with positive XM results. The Institutional Review Board of Seoul St. Mary’s Hospital approved this study (KC20RISI0186).

The XM testing conducted in our laboratory is as described previously [14]. In brief, total lymphocytes, and T and B lymphocytes were respectively isolated from 20 mL of donor fresh whole blood, using a cell isolation kit (EasySep, STEMCELLTechnologies, Vancouver, Canada). For the CDC test, the donor lymphocyte suspension was incubated with recipient serum followed by addition of the rabbit complement (One lambda, Canoga Park, CA, USA). The T-cell anti-human globulin antibody (AHG) test involved the addition of 1 µL of AHG after incubation of donor cells with recipient serum. For the FCXM test, CD3-PC5 and CD19-PC7 were used as markers to separate the T and B lymphocytes. All lymphocytes were treated with pronase (Type XIV, Sigma, St. Louis, MO, USA) (1.0 mg/mL) for 30 minutes at 37°C to minimize interference by the non-specific binding of human IgG to the Fc receptor on B lymphocytes. After incubation, lymphocytes were analyzed using a Navios flow cytometer (Beckman Coulter, San Diego, CA, USA). In cases where pronase-induced T-cell positive or IgM autoantibody-induced B-cell CDC-positive XM results were suspected, additional tests were performed using pronase-untreated or dithiothreitol-treated lymphocytes, respectively. The cutoff value for a positive T-cell (>1.17) and B-cell (>1.14) FCXM result was determined as the mean fluorescent intensity (MFI) ratio, with three standard deviations, obtained using HLA antibody-negative sera, as recommended [15].

In all positive XM patients, the LABScreen Single Antigen kit (One Lambda) was used to detect HLA antibodies. All patients and donors were typed for HLA-A, -B, -C, -DRB1, -DQA1, and -DQB1 using the LABType SSO kit (One Lambda). Ambiguities were resolved by sequence-based typing (SBT). SBT was performed using AlleleSEQR (GenDx, USA), and sequencing was performed on an 3500 Genetic Analyzer (Thermo fisher, USA). A positive DSA result was defined as having at least one HLA-DSA (HLA-A, B, Cw, DR, or DQ), with an MFI≥1,000 identified using the SAB assay. All DSAs were confirmed by eplet analysis, using the HLA matchmaker program, as previously described [16]. Positive DSA results are listed, along with their median values and 95% confidential intervals, in Table 1. We classified the XM tests into CDC, AHG, and FCXM types and DSAs into Class I DSAs and Class II DSAs to identify patients in each subgroup. A chi-square test was performed to compare the clinical features between DSA positive and negative groups.

Table 1 . T-cell/B-cell CDC and FCXM results in 251 XM-positive patients according to the presence of DSAs

To determine whether the positive XM results were generated by non-HLA antibodies, we additionally tested for the presence of anti-AT1R IgG antibodies and 33 non-HLA antibodies in the 13 patients with an unexplained positive pretransplant XM result using leftover sera from XM tests. Anti-AT1R IgG antibodies were detected using a commercially available ELISA kit (One Lambda), as previously described [7]. To determine the non-HLA antibody profile, LABScreen Autoantibody group 1 (32 targets) and group 2 (one target) kits (One Lambda) were further used, according to the manufacturer’s instructions. In brief, 40 μL of serum and 10 μL of autoantibody microsphere mix were incubated for 30 minutes in the dark at room temperature (20-24°C). After washing, phycoerythrin-conjugated anti-human IgG was added and incubated for 30 minutes. After washing, the samples were analyzed on a LABScan3D flow analyzer (One Lambda). A positive non-HLA antibody reaction was defined by a value above the reference background value of each antigen-coated bead provided by the manufacturer. The positive non-HLA antibody reaction values were obtained from the adjusted MFI values based on the 95th percentile values from non-transplanted individuals.

Desensitization therapy was performed for 225 (89.6%) of 251 patients with pretransplant DSAs and/or positive XM results [17]. Briefly, rituximab, at a dose of 375 mg/m2 (Mabthera Genentech, Inc., San Francisco, CA, USA), was administered two to three weeks prior to transplantation, and plasmapheresis/intravenous immunoglobulin (100 mg/kg) therapy was initiated 13 days before transplantation and administered every 48 hours.

Among the 251 patients with positive XM results, 88 (35.1%) had DSAs against donor HLAs. Gender (females), sensitization (transfusion, pregnancy, and transplantation) history, and HLA antibody positivity were significantly associated with DSA positivity ( value <0.05). XM results of the T-cell/B-cell CDC and FCXM tests are summarized according to the presence of DSAs in Table 1. Among the 163 XM-positive/DSA-negative patients, the 150 that showed only positive B-cell XM result [149 B-cell CDC(+)/B-cell FCXM(+) and 1 B-cell CDC(−)/B-cell FCXM(+)] were considered to have positive results due to rituximab therapy. These 150 patients received rituximab therapy 0–6 months before they showed a positive B-cell XM result. Since the initial XM results of all 150 patients were negative before rituximab treatment, the possibility of positivity induced by rituximab was strongly suggested. For the two out of 163 patients with T-cells, FCXM (+) only, and B-cell CDC (+) only, repeat tests confirmed the results; however, the possibility of technical error cannot be ruled out.

The remaining 13/163 (5.2%) positive XM patients had neither DSAs detected nor a relevant desensitization history.

Table 2 . XM results and associated data in 13 patients with pretransplant positive XM results in the absence of DSAs 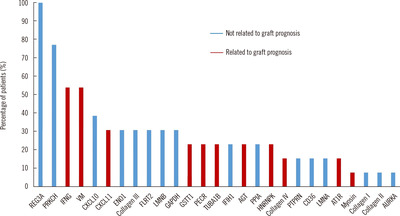 Six of these 13 patients received kidney transplantation (KT) and two of them experienced a rejection episode. Both these patients had pre-transplant non-HLA antibodies (patient 2: C-X-C motif chemokine 11 and interferon (IFN)-γ; patient 7: vimentin, glutathione S-transferase theta-1, and peroxisomal trans-2-enoyl-CoA reductase), which are associated with chronic renal allograft injuries or poor prognosis of transplantation [5,9–13]. At the time of the rejection episode, patient 2 showed decreased MFI values for non-HLA antibodies, whereas patient 7 showed similar MFI values and developed non-HLA antibodies against angiotensinogen, peptidyl-prolyl cis-trans isomerase A, and IFN-γ. The decreased MFI values may have been due to the absorption of non-HLA antibodies by the graft. Although non-HLA autoantibodies were identified in all unexplained positive pretransplant XM results, we could not find a direct relationship among the type or intensity of the autoantibodies, the MFI ratio of the positive XM result, and the graft outcome. These findings suggest that non-HLA antibodies interact with diverse factors to influence the clinical outcome.

In conclusion, we suggest considering a non-HLA antibody testing when a CDC or FCXM test result is positive without an identifiable cause. Assessment of non-HLA antibodies might further be useful for interpreting XM results and for evaluating the immunologic risk in transplant recipients. Further studies will be needed to elucidate the mechanism by which non-HLA antibodies are involved in the post-transplant immunologic reaction and their effect on the long-term prognosis.

No potential conflicts of interest relevant to this article are reported.

This work was supported by a National Research Foundation of Korea grant funded by the Korean government (MSIP) (NRF-2020R1A2B5B01001859).