Background: The emergence of carbapenemase-producing Enterobacteriaceae (CPE) represents a major clinical problem. Recently, the occurrence of CPE has increased globally, but epidemiological patterns vary across region. We report the trends in the genotypic distribution and antimicrobial susceptibility of CPE isolated from rectal and clinical samples during a four-year period.
Methods: Between January 2016 and December 2019, 1,254 nonduplicated CPE isolates were obtained from four university hospitals in Korea. Carbapenemase genotypes were determined by multiplex real-time PCR. Antimicrobial susceptibility was profiled using the Vitek 2 system (bioMérieux, Hazelwood, MO, USA) or MicroScan Walkaway-96 system (Siemens West Sacramento, CA, USA). The proportions of carbapenemase genotypes and nonsusceptibility were analyzed using Pearson’s chi-square test.
Results: Among the 1,254 CPE isolates, 486 (38.8%), 371 (29.6%), 357 (28.5%), 8 (0.6%), 8 (0.6%), and 24 (1.9%) were Klebsiella pneumoniae carbapenemase (KPC), oxacillinase (OXA)-48-like, New Delhi metallo-β-lactamase (NDM), imipenemase (IMP), Verona integron-encoded metallo-β-lactamase (VIM), and multiple producers, respectively. The predominant species was K. pneumoniae (72.6%), followed by Escherichia coli (6.5%). More than 90% of the isolates harboring KPC, NDM, and OXA-48-like were nonsusceptible to cephalosporins, aztreonam, and carbapenems.
Conclusions: The impact of CPE is primarily due to KPC-, NDM-, and OXA-48-like-producing K. pneumoniae isolates. Isolates carrying these carbapenemase are mostly multidrug-resistant. Control strategies based on these genotypic distributions and antimicrobial susceptibilities of CPE isolates are required.

The occurrence of CPE has increased globally, but their epidemiological patterns vary across region. KPC-producing was first isolated in North Carolina, USA, in 1996 [5]. Numerous outbreaks related to these strains have been reported in the USA, South America, Greece, Italy, Israel, and China [1]. NDM producers were identified in early 2008 from an Indian patient hospitalized previously in New Delhi, India; since then, they have been detected in most countries related with India [6]. Recently, isolates from the Balkan states and the Middle East have served as reservoirs of NDM producers [7]. The first OXA-48-producing strain was isolated in Istanbul, Turkey, in 2001 [8]. Various strains, including OXA-48 strains, have caused several outbreaks in Mediterranean and Southern Europe, the Indian subcontinent, and Northern Africa [2, 7].

Between January 2016 and December 2019, CPE isolates were prospectively collected from four university hospitals in a metropolitan area of Korea (two hospitals, Kangnam Sacred Heart Hospital with 572 beds [A] and Hangang Sacred Heart Hospital with 158 beds [B] in Seoul, and two, Hallym University Sacred Heart Hospital with 834 beds [C] and Dongtan Sacred Heart Hospital with 660 beds [D] in Gyeonggi-do). In total, 1,254 nonduplicated CPE isolates harboring carbapenemase genes were collected (N=308, hospital A; N=55, hospital B; N=856, hospital C; N=35, hospital D). The isolates had been obtained from rectal samples taken for epidemiological and infection control purposes and clinical samples taken during the work-up of patients with suspected infections. The following clinical samples were provided: sputum (N=158, 12.6%), urine (N=130, 10.3%), blood (N=58, 4.6%), body fluid (N=36, 2.9%), wound or pus (N=22, 1.8%), and swabs (N=10, 0.8%). The isolates from patients in the intensive care unit (ICU) were more than a half of the included CPE isolates (N=792, 63.2%). Bacteria were identified using a Vitek 2 system (bioMérieux, Hazelwood, MO, USA) at hospitals B and D, amatrix-assisted laser desorption ionization-time-of-flight mass spectrometry on a Vitek-MS instrument (bioMérieux) at hospital A, and a MicroScan Walkaway-96 system (Siemens, West Sacramento, CA, USA) at hospital C. After collecting carbapenem-nonsusceptible isolates (based on a minimal inhibitory concentration [MIC]>0.5 μg/mL for ertapenem or MIC>1 μg/mL for imipenem or meropenem) from the four hospitals, the modified Hodge test (MHT) and carbapenemase inhibition test (CIT) were used for CPE detection at hospital A [11]. Clinical information, such as hospital of origin, sampling date, isolation site, department, and hospitalization ward, was collected by reviewing the medical records. The study protocol was approved by the Institutional Review Board of Kangnam Sacred Heart Hospital, Seoul (HKS 2020-03-020), which waived the need for informed consent. The data used in this study have been deposited in Harvard Dataverse and are accessible through https://doi.org/10.7910/DVN/QR9DR6.

PANA Real Typer CRE kits (PANAGENE Inc., Daejeon, Korea) utilizing peptide nucleic acid-mediated multiplex real-time PCR were used to type all CPE isolates that tested carbapenemase-positive using MHT and CIT. The primers and probes, which were designed to target six carbapenemase genes (KPC, GES, NDM, VIM, IMP, and OXA-48-like) and an internal control, were provided by PANAGENE Inc. The sequences have been previously published [12]. The multiplex real-time PCR assay was conducted in a 96-well plate on a CFX-96 Real-Time PCR detection system (Bio-Rad Laboratories Inc., Hercules, CA, USA) using the PANA Real Typer CRE kit per the manufacturer’s instructions. Reaction mixtures contained 5 μL of genomic DNA, 1μL of Taq DNA polymerase, and 19 μL of the primer/probe and multiplex real-time PCR master mixtures. Thermal cycles were as follows: 50°C for 2 minutes and 95°C for 15 minutes; 45 cycles of 95°C for 15 seconds, 58°C for 45 seconds, and 72°C for 15 seconds; 95°C for 5 minutes; 35°C for 5 minutes; and a melting-curve step (35°C to 80°C in 0.5°C increments for 5 seconds). Fluorescence was acquired on all four channels (Blue/FAM for KPC and IMP, Green/HEX for GES and NDM, Yellow/ROX for VIM and OXA-48, and Violet/Cy5 for the internal control). After each run, the threshold cycle (Ct) was measured based on the signal strength, at which the fluorescence exceeded the threshold. Rectal and clinical samples with a Ct value <35 were regarded positive. RNase-free water was used as a negative control in each run.

The MICs of the isolates were determined using the Vitek 2 system at hospitals A, B, and D and the MicroScan Walkaway-96 system at hospital C. Nonsusceptibility rates were calculated by dividing the number of isolates showing nonsusceptibility by the total number of isolates. The analyzed antimicrobial agents were cefotaxime, ceftazidime, cefepime, aztreonam, ertapenem, imipenem (or meropenem), amikacin, gentamicin, ciprofloxacin (or levofloxacin), trimethoprim-sulfamethoxazole, and tigecycline. MIC breakpoints were applied according to the Clinical and Laboratory Standards Institute (CLSI) guidelines (M100S) [13]. For tigecycline, MIC results were interpreted according to the European Committee for Antimicrobial Susceptibility Testing criteria [14]. Intermediate susceptibility was determined according to the criteria set in the CLSI guidelines and per the European Committee for Antimicrobial Susceptibility Testing [13, 14]. 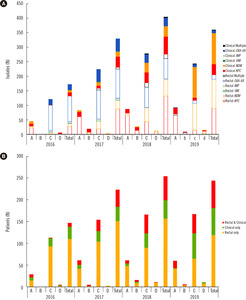 Table 1 . Distribution of the most prevalent carbapenemase genotypes according to carbapenemase-producing species 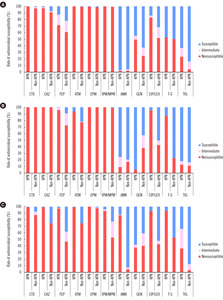 Regarding , representing most of the CPE isolates, more than 90% of the isolates with -like were nonsusceptible to cefotaxime, ceftazidime, cefepime, aztreonam, ertapenem, imipenem, and meropenem. -harboring isolates and -harboring from rectal samples showed lesser nonsusceptibility rates (<90%) to cefepime and aztreonam, respectively (Fig. 3). harboring -like in both rectal and clinical samples presented more than 90% of nonsusceptibility to ciprofloxacin, levofloxacin, and trimethoprim-sulfamethoxazole. 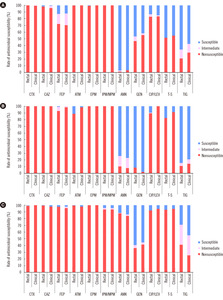 In the USA and Europe, is the main pathogen harboring , and the first case of infection with a KPC-producing extremely nonsusceptible isolate in Korea was reported in 2010 [17]. The first outbreak of KPC-producing in Korea in 2013 was likely due to clonal spread [18].

The Indian subcontinent is recognized as an NDM endemic zone, and the associated species are mostly and . NDM-producing isolates producing nearly identical pulsed-field gel electrophoresis patterns were first detected in Korea in 2010 [19]. Nosocomial transmission of genetically related NDM-producing from four elderly patients was reported in a Korean hospital in 2011 [20]. In this study, and were frequently detected NDM producers in rectal samples. These species were also more commonly detected among NDM rather than KPC and OXA-48-like producers in Canada and major strains in Korea in a study conducted in 2015 [9, 21].

OXA-48-like producers are often detected in Northern Africa and the Mediterranean area and is increasingly being reported in , such as and [7, 16]. Korea is known for outbreaks of and that produce OXA-232, which was identified as an variant differing in a few amino acids [22, 23]. Clonal and horizontal spread of these -harboring species has caused persistent outbreaks in Korea [9, 22].

Although the proportions of IMP (0.6%) and VIM (0.6%) producers among CPE were relatively low in this study, strains with these genes cause sporadic outbreaks mainly in Southeast Asia and the Americas, respectively [24]. In Korea, an outbreak of IMP-producing carbapenem-nonsusceptible strains from four ICU patients was reported in 2017 [25]. After the first identification of VIM in 1999, it has spread mainly in , with several outbreaks [26, 27].

The predominant CPE genotypes in Korea showed hospital-specific differences. In particular, hospital C had more NDM and OXA-48-like producers than KPC compared with the other hospitals. Thus, the control of nosocomial spread of CPE may require different measures depending on the local circumstances.

KPC-producing isolates were highly nonsusceptible to cefotaxime, ceftazidime, aztreonam, ertapenem, imipenem, and meropenem. Treatment options for infections caused by KPC producers remain limited because these strains are mostly multidrug-nonsusceptible [7]. Among cephalosporins, nonsusceptibility rates for cefepime (71.5% of isolates and 60.9% of non- isolates) were lower than those for cefotaxime and ceftazidime (>90% of both and non- isolates). Cefepime is a fourth-generation cephalosporin proven to be an extended-spectrum antimicrobial against gram-negative pathogens. Compared with other cephalosporins, cefepime exhibits high affinity for KPC, which has led to high susceptibility rates in previous studies [28 29]. The use of cefepime in combination with amoxicillin-clavulanate has been recommended for the treatment of KPC-producing infections [30].

In line with our results, NDM-producing were nonsusceptible to nearly all antimicrobials, except tigecycline [2, 31]. Typically, metallo-β-lactamases, such as NDM, weakly hydrolyze aztreonam [32]. However, the NDM-producing isolates exhibited a high nonsusceptibility rate (>90%) to aztreonam in clinical samples. The isolates likely had extended-spectrum β-lactamase (ESBL) or permeability defects simultaneously [31]. Plasmids containing are diverse and harbor numerous nonsusceptible genes related to carbapenemases, such as OXA-48, VIM types, ESBLs, AmpCs, and sulfamethoxazole-nonsusceptible genes, and thus frequently provide multidrug or extensive drug nonsusceptibility [7, 31].

In general, OXA-48-like producers effectively hydrolyze penicillins, whereas they weakly hydrolyze carbapenems and cephalosporins [23]. Non- isolates harboring in our study showed similar trends. However, OXA-48-like-producing isolates exhibited high nonsusceptibility (>90%) to all cephalosporins, aztreonam, carbapenems, fluoroquinolones, and even trimethoprim-sulfamethoxazole. When combining ESBL or permeability defects, OXA-48 producers showed a high level of nonsusceptibility to broad-spectrum cephalosporins, aminoglycosides, fluoroquinolones, and carbapenems [23]. In a previous study in Korea, all OXA-232-producing isolates co-produced ESBL, such as CTX-M-15 [9]. Therefore, only tigecycline remains effective against these OXA-48-producing isolates [7, 9, 23]. The dissemination of the -like gene to various has been worrisome, because it is unusually located on a small and self-transferable plasmid [23, 33].

This study has some limitations. We only evaluated carbapenemases, not ESBLs and AmpCs. However, most CPE isolated in Korea also harbor an ESBL [9]. Differences in the commercial platforms utilized for the identification and antimicrobial susceptibility testing in the different hospitals might have affected the results. In addition, hospital size likely influenced the distribution results.

In summary, the impact of CPE in Korea is primarily due to KPC-, NDM-, and OXA-48-like-producing isolates. isolates harboring these carbapenemase genes were mostly multidrug-nonsusceptible or extensively drug-nonsusceptible. Moreover, a stepwise and significant increase in CPE was noted in recent years. These genetic trends have affected the antimicrobial susceptibility patterns. These worsening antimicrobial nonsusceptibility trends should be reflected in precise and aggressive control strategies to combat CPE.

The authors appreciate the support and cooperation of clinical microbiology technicians in Hallym University Medical Centers.

This work was supported by a National Research Foundation of Korea (NRF) grant, funded by the Korean Government (Ministry of Science and ICT) (NRF-2017R1C1B2004597). The funders had no role in the study design, data collection and analysis, decision to publish, or preparation of the manuscript.