Background: Rotaviruses are a major cause of pediatric gastroenteritis. The rotavirus P[6] genotype is the most prevalent genotype isolated from Korean neonates but has rarely been reported in other countries. Histo-blood group antigen (HBGA) is known to play an important role in rotavirus infection. We investigated the relationship between rotavirus genotype and HBGA-Lewis blood type in Korean children and explored the reasons for the predominance of rotavirus P[6] strain in Korean neonates.
Methods: Blood and stool samples were collected from 16 rotavirus-infected patients. Rotavirus G (VP7) and P (VP4) genotyping was performed using reverse transcription-PCR and sequencing. Lewis antigen phenotypes (Lea/Leb) were tested, and HBGA-Lewis genotype was determined by sequencing the secretor (FUT2) and Lewis (FUT3) genes. Deduced amino acid sequences and three-dimensional structures of the VP8* portion of the rotavirus VP4 protein were analyzed.
Results: All P[6] rotaviruses were isolated from neonates under one month of age, who were negative or weakly positive for the Leb antigen. However, 10 of the 11 non-P[6] rotaviruses were isolated from older children who were Leb antigen-positive. The VP8* amino acid sequences differed among P[6], P[4], and P[8] genotypes. Korean P[6] strains showed a unique VP8* sequence with amino acid substitutions, including Y169>L169, which differed from the sequences of P[6] strains from other countries.
Conclusions: The predominance of the rotavirus P[6] genotype in Korean neonates may be related to the interaction between HBGA-Lewis antigen and the VP8* portion of the VP4 protein, and this information will be helpful in future neonatal vaccine development.

Rotaviruses are one of the major causes of pediatric gastroenteritis worldwide. Rotaviruses cause 5–10% of all cases of acute gastroenteritis in young children of < 5 years of age, and 30% of rotavirus infections are severe enough to require treatment [1]. Rotavirus is a non-enveloped, double-stranded RNA (dsRNA) virus with a triple-layered capsid surrounding a genome of 11 dsRNA segments [1]. The outer capsid layer comprises two structural proteins, VP7 and VP4; based on these, rotaviruses are classified into at least 36 G and 51 P genotypes [2]. G1–G4 and G9 and P[4], P[6], and P[8] are the most prevelent G and P genotypes, respectively [1, 3], and the genotypic distribution of rotavirus strains shows temporal and geographical fluctuations [1, 4].

We investigated the relationship between rotavirus genotype and HBGA-Lewis type in Korean children and explored the reasons for the predominance of rotavirus P[6] infection in Korean neonates.

We used rotavirus-positive stool samples and corresponding blood samples, which were remnants to be discarded after rotavirus test and complete blood count test, collected from acute gastroenteritis patients at Hallym University Dongtan Sacred Heart Hospital, Hwaseong-si, Korea, between February 2019 and January 2020. The rotavirus antigen test was conducted using SD BIOLINE Rotavirus (SD BIOLINE Rotavirus; Abbott Diagnostic Korea, Yongin, Korea) or RIDASCREEN Rotavirus test kits (RIDASCREEN Rotavirus; R-Biopharm, Darmstadt, Germany), according to the manufacturer’s protocol. The Lewis phenotyping test and DNA extraction were performed on day of sample collection; extracted DNA and remnant diluted stool samples were stored at −70°C until use. During this period, 66 of the 726 stool samples (9.1%) were rotavirus-positive; adequate stool and corresponding blood samples for sequencing the four genes (the rotavirus VP4/VP7 genes and / genes) and Lewis antigen phenotyping were available for 16 patients. Median patient age was 3.4 years (range, 8 days−10 years), and six patients (37.5%) were under 30 days of age. The Institutional Review Board (IRB) of Hallym University Dongtan Sacred Heart Hospital (IRB No. 2017-08-007) approved the study protocol and waived the need for informed consent.

Lewis antigen phenotyping was performed using ID-Antigen Profile I (Bio-Rad, Cressier Switzerland) and gel suspensions containing antibodies for the P, Lea, Leb, Lua, Lub, and ctl antigens, according to the manufacturer’s protocol. A 5% erythrocyte suspension was prepared from each EDTA-anticoagulated blood sample by mixing 50 µL of erythrocytes in 0.5 mL of Diluent 1 solution. The cell suspension was incubated for 10 minutes at room temperature (18–25°C), and 12.5 µL of the cell suspension was added to each phenotype ID-card micro-tube. The ID-cards were then centrifuged for 10 minutes in the ID-centrifuge 12 S II (Bio-Rad) and read in the range between negative to 4+, according to the agglutination strength.

PCR and sequencing of the secretor and Lewis genes ( and )

DNA was extracted from EDTA-anticoagulated blood samples using the QIAamp Blood Mini kit (Qiagen). A 1,153-bp region of the gene was amplified using the tk1/tk2 primer set [14], and two segments (917 and 419 bp) of the gene were amplified using two primer sets (N-F1/6R and 4F/8R) [15]. The forward primer sequence of N-F1 (TGATGACCGGCTATGCCTTC) was specifically designed for this study. PCR products were analyzed by DNA sequencing using ABI BigDye Terminator v3.1 Cycle Sequencing kits and an ABI 3500 XL DNA Analyzer. Variants of the and genes were detected by comparison with reference sequences FUT2*01 and (http://erythrogene.com). Minor allele variants at the c.418, c.461, and c.772 and c.59, c.202, c.314, c.508, and c.1067 sites, which are known to be related to Lewis antigen phenotypes, were examined [16, 17].

Table 3 . Deduced amino acid sequences of the antigenic epitopes of the VP8* portion of the VP4 capsid protein

3D structure of the VP8* glycoprotein 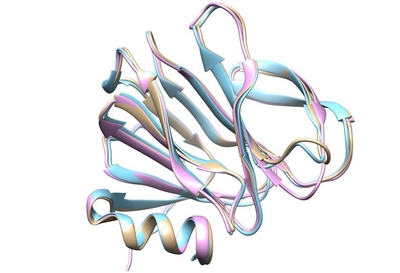 We investigated the relationship between rotavirus genotypes and HBGA-Lewis blood type in Korean children with rotavirus infections, and explored the reason for the P[6] genotype predominance in Korean neonates. Although the number of cases was small, all P[6] rotaviruses were isolated from neonates who were Leb antigen-negative or weakly positive. In contrast, nonP[6] rotaviruses were isolated from older children (except for patient 12, aged 20 days) who were Leb antigen-positive. These results suggest that neonate-specific P[6] rotaviruses easily infect neonates who are negative or weakly positive for Leb antigen, but rarely infect patients who are Leb antigen-positive or older children. Our results are supported by recent studies showing that rotavirus P[6] strains can infect Lewis-negative individuals, regardless of their secretor status [22, 23]. In the neonate gut, modification to the precursor moieties or branching of Lewis HBGA is developmentally regulated, and thus the most abundant type of Lewis HBGA in the neonate gut is the unbranched type I precursor glycan, Le(a-b-) [24]. Only a few studies in Africa have also reported the relationship between P[6] and neonates; however, the proportion of P[6] infection in neonates were at most 25% in those studies [22, 25, 26]. This phenomenon may be related to the higher proportion of Le(a-b-) in Koreans and Africans than in Caucasian or Chinese populations [14, 22, 27, 28]. Contrarily, this may be related to the noted differences in the VP8* amino acid sequences between the Korean rotavirus P[6] strains and those of the P[6] strains detected in other countries (Table 3).

In terms of differences in the 3D structure between the rotavirus VP8* portion and Lewis HBGA, the cleft between the betasheets of rotavirus P[6] has been reported to be wider than that in P[14], and rotavirus P[6] has been suggested to bind to the unbranched type I precursor glycan, Le(a-b-), rather than to the branched HBGA, Le(a-b+) [12]. However, in our study, the cleft between the beta-sheets of the P[6] rotavirus was not markedly wider than that of P[4] or P[8] strains (Fig. 1).

A previous study suggested that a single residue of the neonatal P[6] VP8*, specifically H169, which is well conserved in most neonate-specific P[6] genotypes, alters the glycan conformation [12]. However, all neonatal G8P[6] in this study showed a different amino acid residue, L169 instead of H169, which can cause P[6] infection in Korean neonates. Other amino acid substitutions at different sites (N88D, V103I, T125M, K126R, K136T, S145R, S146T, V147A, S148G, R155H, H169L, H178Y, S188L S189L, and T198A) may cause a small change in the 3D structure or hydrogen bond/hydrophobic interaction between the VP8* of the rotavirus VP4 protein and HBGA molecules in patients, which may involve ageor population-related tropism of some P[6] strains [12].

In conclusion, we found that the rotavirus P[6] genotype predominance in Korean neonates may be related to the interaction between the patient’s HBGA-Lewis antigen phenotype and the VP8* portion of the rotavirus VP4 capsid protein. Four possible explanations are suggested: (1) P[6] infection may be related to Leb antigen-negative or weakly positive status; (2) Lewis antigens are not fully developed in the neonate gut; (3) the proportion of Le(a-b-) is higher in Korea than in other countries; and (4) the antigenicity of rotavirus P[6] strains isolated in Korea is different from that of P[6] strains isolated in other countries. Although, this study is limited with the small number of patients, the results provide valuable information on future development of neonatal rotavirus vaccine.

No potential conflicts of interest relevant to this study are reported.

This work was supported by the National Research Foundation of Korea (NRF-2017R1D1A3B03031940) and by the Hallym University Research Fund.