der(1)t(1;1)(p36;q10) as a Rare Variant of 1q Gain in Fanconi Anemia-Associated Myelodysplastic Syndrome

Fanconi anemia (FA) is an inherited condition of genomic instability that is characterized by congenital abnormalities, progressive bone marrow failure (BMF), and susceptibility to hematologic malignancies and/or solid tumors [1]. Technological advancement has facilitated the elucidation of the molecular basis of FA, and 22 genes have been identified to play a role in FA pathogenesis. BMF is the most common presenting characteristic, occurring in more than 90% of cases. Congenital abnormalities (short stature, café-au-lait, and internal organ malformations) are often but not always present [1-4].

Myelodysplastic syndrome (MDS) and acute myeloid leukemia (AML) occur in 30%–40% of FA cases by the age of 40–50 years [1]. Although BMF usually precedes MDS and AML, it may occasionally be undiagnosed, and MDS or AML can be the first manifestation of previously unknown FA. FA-associated MDS (FA-MDS) has characteristic recurrent cytogenetic abnormalities, including gain of 1q, gain of 3q, and monosomy/deletion of 7/7q [3]. We present a case of MDS with a background of undiagnosed FA and a rare 1q gain variant, which has been reported only in two cases of non-FA-MDS [5]. As cytogenetic and bone marrow analyses were performed only for routine diagnostic work-up in FA, the approval of Institutional Review Board was exempted.

A 16-year-old boy from the Republic of Azerbaijan with anorexia and malaise for five months was referred to a children’s hospital (Children Medical Center, Tehran, Iran) with a clinical impression of aplastic anemia; he underwent diagnostic workup and an initial treatment for two months from September to November 2018. The unit summary sheet of his previous hospitalization for malaise in August 2018 showed the following laboratory results: white blood cell count, 0.2 × 109/L; hemoglobin, 88 g/L; platelet count, 62 × 109/L; and hypocellular bone marrow aspiration. The only abnormal dysmorphic characteristic on examination was thumbs that resembled fingers.

Based on these results, chromosomal breakage analysis with mitomycin C was performed using peripheral blood, and the results demonstrated 48 chromatid breaks, as well as triradial formation (counted as two breaks and added to the break number) in 50 analyzed cells (Fig. 1A). This result supported FA diagnosis. Treatment with danazol (200 mg daily) was initiated for two months. The patient subsequently underwent a bone marrow aspiration and biopsy as a pre-hematopoietic stem cell transplantation workup. The bone marrow aspirate was dilute and unsuitable for evaluation. The flow cytometric results were non-specific and showed a blast population of 4%. Cytogenetic analysis of bone marrow culture showed 45,XY,der(1)t(1;1) (p36;q10),-7[18]/46XY[2] (Fig. 1B). The bone marrow biopsy was hypercellular with a remarkable number of non-lobulated and hypolobulated micromegakaryocytes in a background of dysplastic hematopoietic cells (especially in myeloid cells, presenting as hypogranularity, hypolobulation, and decreased maturation of the late myeloid series) and fibrosis (Fig. 2A and B). Immunohistochemistry confirmed the nature of the megakaryocytes based on the positive cytoplasmic reaction of these cells with factor VIII-related antigen (Fig. 2C). The number of blasts was estimated at approximately 4%–5% by CD34 staining (Fig. 2D). 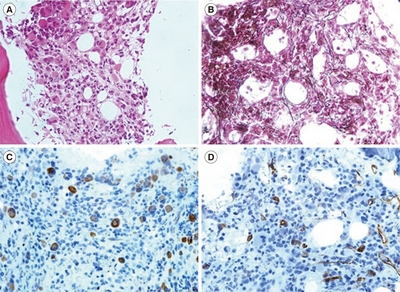 MDS in FA patients represents multilineage dysplasia with or without excess blasts [6]. MDS with fibrosis (MDS-F) is not a specific subgroup and occurs in 10%–15% of MDS patients, with an aggressive clinical course irrespective of excess blasts [7, 8].

According to a recent review, chromosome 1q gain in the form of der(1)t(1;1)(p36;q11-32) has been described only rarely in the literature (34 cases) in association with myeloid malignancies (14 AMLs and only two MDSs), lymphoid malignancies, and plasma cell neoplasms. It has a mild male tendency (male to female ratio = 1.4 to 1) and confers a poor prognosis in hematologic neoplasms owing to 1p36/PRDM rearrangement and unbalanced translocation, which may be the result of genomic instability [5, 9]. Additional cytogenetic abnormalities in these cases include chromosome 5 and/or 7 deletions (in AML), Philadelphia chromosome (in chronic myeloid leukemia and acute lymphoblastic leukemia), and a very complex karyotype. The two cases of MDS with der(1)t(1;1)(p36;q11-32) were not related to FA [5].

Finally, der(1)t(1;1)(p36;q10) should be considered a rare 1q gain variant in MDS and should prompt a work-up for FA. Its prognostic value in FA-MDS warrants further study including more cases with this variant as the sole abnormality without any additional cytogenetic aberrations.