is an opportunistic pathogen that causes a wide range of infections. Over the past two decades, a new “hypervirulent” (hvKP) strain with hypermucoviscosity, unlike “classic” (cKP), has emerged as a clinically significant pathogen causing highly invasive infections, such as liver abscesses, in both healthy and immunocompromised individuals [1, 2]. To the best of our knowledge, only two cases of osteomyelitis due to hvKp have been reported to date [3, 4]. We present the first case of osteomyelitis due to hvKP spread within a family in Korea. This study was approved by the Institutional Review Board of Nowon Eulji University Hospital, Seoul, Korea. Informed consent was obtained from the patient’s husband.

In February 2019, a previously healthy, 60-year-old Korean woman was admitted to a hospital with a three-week history of severe pain in her right thigh. On admission, she was afebrile (37.2°C) but had mild leukocytosis (white blood cell count, 16.9 × 109/L) with elevated C-reactive protein (3.37 mg/L) and procalcitonin (8.3 μg/L) levels. On the second day of admission, magnetic resonance imaging of her right thigh showed increased signal intensity in the quadriceps muscle and femur, with bone edema and fluid collection. On the third day of admission, she had fever of 38.9°C, accompanied by general weakness. After blood and urine cultures were obtained, empirical antibiotic therapy with intravenous tazobactam/piperacillin and vancomycin was initiated. Systemic inflammatory response syndrome (SIRS) was confirmed with leukocytosis (white blood cell count, 30.9 × 109/L; segmented neutrophils, 89.0%), and her respiration rate was 43 breaths/minute. She underwent urgent surgical debridement, and a small abscess with periosteal thickening due to osteomyelitis was observed. Her blood pressure (72/41 mmHg) and oxygen saturation (87%) decreased in the evening. The patient did not recover from SIRS and expired on the fifth day of admission. The urine culture result was found to be positive a day after her death, while two blood culture sets and intraoperative pus culture gave positive results two days after her death. The pathogen was identified as hypermucoviscous through a positive string test [1].

Osteomyelitis in long bones caused by is rare; the possible mechanism of osteomyelitis appears to be the hematogenous spread of bacteria colonizing the gastrointestinal tract [3]. Our investigation into the cause of the invasive infection in this patient revealed that her husband had been treated for a liver abscess three years ago. One month after the patient died, her husband’s stool was cultured, and was isolated from it.

We characterized the antimicrobial susceptibility of two isolates from the patient’s blood samples and her husband’s stool sample using the VITEK-2 system (BioMérieux, Marcy-l′Étoile, France) and genetic relatedness using capsular typing and multilocus sequence typing. Both isolates were susceptible to all antibiotics except ampicillin, similar to susceptibility patterns reported in China [5] and the USA [3]. The isolates were identified as capsular serotype/genotype K1 and sequence type 23 (ST23). K1 ST23 strains closely associated with liver abscesses were identified in 4.9% of healthy Koreans in 2007 [6]. The familial spread of K1 isolates causing liver abscesses was first reported in Japan in 2011 [7]. Most hvKP strains are type K1 or K2 and have remained antibiotic-sensitive.

Whole-genome sequencing using the MiSeq (Illumina Inc., San Diego, CA, USA) platform and comparative genomic analysis of the two isolates were conducted by ChunLab, Seoul, Korea. The phylogenetic tree shows that the two isolates in this case are closely related to a liver abscess isolate from Taiwan and a femoral bone isolate from the USA [3, 8] (Fig. 1A); a carbapenem-resistant strain and carbapenem-resistant hvKP strains from China are also closely related [9, 10]. Fig. 1B presents a comparative Venn diagram of six hvKP strains sharing multiple genes (4,475); the two strains in this case are more closely related to each other than they are to the other strains. As seen in this case, a number of virulence factors in hypermucoviscous isolates are associated with a large virulence plasmid, which encodes multiple virulence factors, including and (Table 1). The capsular genotype (K1 or K2) plays a more significant role than and in determining virulence in liver abscesses [3]. 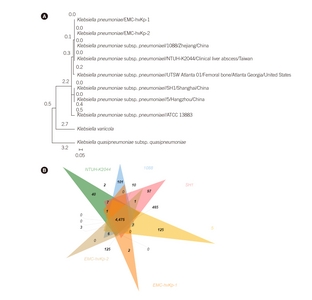 In conclusion, HvKp can be a member of the gut microbiome, which likely contributes to its dissemination in communities and hospitals. Microbiologists and clinicians should be more aware of the possible severity of infections caused by this strain of .