Whole-genome sequencing (WGS) is an easily accessible and valuable tool in clinical microbiology, which can be used for identifying novel and rare species. We isolated gram-positive cocci from the blood of a pediatric patient, which could not be phenotypically identified using matrix-assisted laser desorption/ionization time-of-flight mass spectrometry (MALDI-TOF MS) (BioM?rieux, Marcy-l’?toile, France). We could not identify the isolate to the species level using 16S ribosomal RNA (rRNA) sequencing. WGS was performed using the Illumina MiSeq platform (Illumina, San Diego, CA, USA); however, the subsequent genomic sequence database search using the TrueBac ID-Genome system (ChunLab, Inc., Seoul, Korea) did not yield any hits with an average nucleotide identity value >95.0%, which is the cut-off for species-level identification. Phylogenetic analysis suggested that the isolate belonged to a new Arsenicicoccus species, forming a subcluster with Arsenicicoccus bolidensis. Our data demonstrate that WGS allows a more accurate annotation of microbial genomes than other clinical microbiology tools, such as MALDI-TOF MS and 16S rRNA sequencing. This is the first report of the isolation of a novel Arsenicicoccus species from a clinical sample.

The genus comprises gram-positive, facultatively anaerobic, catalase-positive, and non-spore-forming bacteria that have been isolated from environmental sources and animal specimens [1-3]. was first proposed in 2004 by Collins, [1], who described isolated from mine sediment [4]. is a member of the family and initially comprised a single species, . Subsequently, two additional species have been reported, and , from the intestinal tract of the Japanese fish () and flamingo foot skin, respectively [2, 3].

We investigated a case of bloodstream infection caused by gram-positive cocci that were not accurately identified by routine testing. The isolate was identified as belonging to a novel species using whole-genome sequencing (WGS). A database search and phylogenetic tree analysis were conducted using the whole-genome sequence, and the identified features of the novel species, including its phenotype and antimicrobial susceptibility, are described. The need for informed consent for conducting this study was waived by the Institutional Review Board of Chung-Ang University Hospital, Seoul, Korea (No. 2011-007-19340).

A 17-month-old boy presenting with fever, nonprojectile vomiting, cyclic abdominal pain, and decreased urination was admitted to the emergency department (ED) of Chung-Ang University Hospital, Seoul, Korea, in May 2019. At admission, the patient’s temperature was 37.6°C, and blood analysis indicated a white blood cell count of 10.46 × 109/L, with a 70.0% of neutrophils. The C-reactive protein serum concentration was normal (< 0.1 mg/L), and the patient was discharged from the ED after 5-6 hours following clinical improvement after hydration therapy. However, the patient’s gastrointestinal symptoms aggravated soon thereafter; he presented with persistent vomiting and new symptoms, including diarrhea. In the evening, the patient was readmitted to the ED and diagnosed as having gastroenteritis. Blood analysis showed no significant changes compared to previous ones. Microbial analyses of stool specimens, including PCR analysis for detecting viral pathogens (rotavirus, norovirus, enteric adenovirus, and astrovirus) and a stool culture for detecting bacterial pathogens ( and sp.), showed negative results. Pathogenic microorganisms were also absent in urine specimens; however, bacteria were detected in the patient’s blood. After treatment with cefotaxime for three days, the patient was discharged from the hospital following clinical improvement.

An aerobic blood culture was performed using a pediatric blood culture bottle and the BacTAlert 3D blood culture system (BioMérieux, Inc., Durham, NC, USA); positive signals were detected (BacT/Alert PF Plus; BioMérieux, Inc., Marcy-l’Étoile, France) after approximately 48 hours of incubation at 35.0°C. Subculture on blood and chocolate agar plates were also prepared. After 24 hours, colonies on both media showed a slow growth rate, with a dry, pale yellow, pinpoint morphology (Fig. 1). These isolates were gram-positive clusters of cocci and presented delayed catalaseand coagulase-positive results. The Vitek 2 system (BioMérieux, Marcy-l’Étoile, France) identified the isolate as , with an identification probability of 99%, whereas the Vitek MS system (BioMérieux) could not identify the isolated species even though is included in the Vitek MS database (Version 3.2). species are grampositive, non-spore-forming, α-hemolytic, catalase-negative, and facultative anaerobic cocci. Because the Vitek 2 system identification result did not match the known phenotypic characteristics of the identified species, the isolate was further analyzed using 16S ribosomal RNA (rRNA) gene sequencing (1,446 bp) with universal primers (27F and 1492R) for species-level identification, according to the CLSI document MM18-A [5].

For a more accurate identification of the isolate, WGS using the Illumina MiSeq platform (Illumina, San Diego, CA, USA) and data analysis using the TrueBac ID-Genome system (www.truebacid.com; ChunLab, Inc., Seoul, Korea) were performed [6]. The genome size of the pathogen obtained by WGS was 3,423,857 bp. We further determined a GC content of 71.98%, with an average sequencing depth of 281.8 ×, a total of 62 contigs, and an N50 value of 160,716 bp. The TrueBac ID database search showed that had the highest 16S rRNA sequence identity (99.79%), exceeding the cut-off value (98.7%); however, we did not detect any pathogen with an average nucleotide identity (ANI) value > 95.0%, which is the algorithmic cut-off for species-level identification. showed the highest ANI value, 90.05% (ANI coverage of 76.3%). Details of the database search for identification of the isolated pathogen are presented in Table 1. The whole-genome sequence of the isolated bacterium was submitted to the BioProject database (Accession number PRJNA581338; Table 1).

A phylogenetic tree analysis using the neighbor-joining method with 16S rRNA gene sequences revealed that the newly isolated species (MKL-02) formed a subcluster with CCUG 47306T, with 98% bootstrap support (Fig. 2A). A similar subcluster was determined by phylogenetic tree analysis using WGS combined with unweighted pair group and arithmetic mean clustering methods as well as ANI values. The pathogen of interest (MKL-02) was most closely related to DSM 15745T; however, it was found to be phylogenetically distinct from (Fig. 2B). 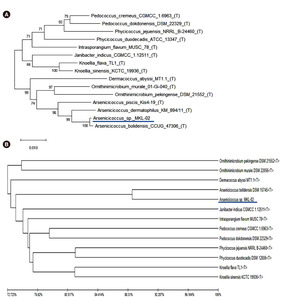 Antimicrobial susceptibility was tested using the Vitek 2 system, AST-ST01. As the Vitek 2 system identified the isolate as , the antimicrobial susceptibility was interpreted according to the CLSI M100 guidelines and interpretive criteria for isolates [7]. The Vitek 2 system data indicated that the isolate is resistant to cefotaxime ( ≥ 8 µg/mL) and ceftriaxone (4 µg/mL). In addition, an antimicrobial susceptibility test was performed by the disk diffusion method, and the results were compared with the minimum inhibitory concentration (MIC) results. In the disk diffusion analysis, the zones of inhibition for cefotaxime and ceftriaxone were 34 and 35 mm, respectively. As there are no cefotaxime and ceftriaxone disk diffusion standard values for , we applied the CLSI M100 guidelines for species (viridans group or beta-hemolytic group), which defined this isolate as susceptible to both antibiotics.

As no susceptibility criteria (MIC or disk diffusion values) are available for species, we decided to define the isolate as clinically sensitive to cefotaxime based on the fact that the patient showed an improved clinical course after cefotaxime treatment.

In clinical microbiology, automated phenotypical identification systems and matrix-assisted laser desorption/ionization time-offlight mass spectrometry (MALDI-TOF MS) have been widely adopted for routine bacterial identification. However, discrepancies among methods are frequently encountered, even if the identification score is high enough to identify organisms at the species level. This problem may originate from overlapping biochemical or proteomic profiles among different strains, the limited number of databases/libraries in the analyzer, or both. Likewise, 16S rRNA gene sequence similarities above cut-off levels (98.7–99.0%) do not guarantee the correct identification of certain strains, as nearly identical 16S rRNA gene sequences have been reported in different species [6, 9]. These species identification difficulties encountered using molecular or phenotypic typing can occur more frequently for strains rarely found in clinical specimens, as in the present case. In such cases, genomebased identification can be useful. Unlike 16S rRNA gene sequencing, WGS provides clear-cut criteria for bacterial classification [10, 11]. The ANI value is most widely used for analyzing genomic sequence similarity and is thus regarded as a possible next-generation gold standard for species delineation. It represents the mean of the similarity values between homologous genomic regions shared by two genes. It is now generally accepted that ANI values of 95–96% equate to a DNA-DNA hybridization value of 70%, which is the accepted standard for bacterial species identification [12].

In conclusion, we identified a clinical isolate to be a grampositive coccus belonging to a novel species (MKL-02), which is most closely related to . Genome-based methods, such as WGS, allow accurate bacterial identification in cases of discrepancies between more commonly used methods of bacterial identification, such as phenotyping, 16S rRNA sequence analysis, and MALDI-TOF MS. Genome-based identification can serve as a useful tool in clinical microbiology as the cost of WGS continues to decrease and database coverage expands.