Progression to promyelocytic blast phase (BP) in chronic myeloid leukemia (CML), -positive is very rare, and only few cases have been reported since the introduction of Tyrosine Kinase Inhibitor (TKI) therapy [1-3]. However, there are no studies on the important considerations for an accurate diagnosis. We report the case of a patient with promyelocytic BP of CML after short-term TKI therapy and provide a review on the diagnosis. The Institutional Review Board of Soonchunhyang University Cheonan Hospital, Chungcheongnam-do, Korea, approved this study (file No. 2020-10-036) and exempted the need for informed consent as there was no identifying information and no harm caused to the patient.

A 35-year-old male patient with leukocytosis (60.55 × 109/L) was admitted to Soonchunhyang University Cheonan Hospital in March 2017. Bone marrow (BM) study revealed hypercellularity with myeloid and megakaryocytic hyperplasia.Chromosomal analysis revealed 46,XY,t(9;22)(q34;q11.2)[20]. The quantity of major fusion transcript was 30.02% (Table 1). The patient was diagnosed as having CML, chronic phase (CP). However, he refused TKI therapy.

Table 1 . Clinical and laboratory features of patients with promyelocytic BP of CML with both and rearrangements after TKI therapy

Two years later (in April 2019), his peripheral blood (PB) smear revealed marked leukocytosis (164.42 × 109/L), anemia, and thrombocytosis, with 2% blasts and left-shifted neutrophilic maturation. Newly developed hepatosplenomegaly was detected. BM finding was similar to the previous results, but diffuse myelofibrosis was additionally detected. The result of chromosomal analysis was same as before, but the quantity of fusion transcript increased to 96.17%. The patient was started on dasatinib treatment (100 mg once daily). His leukocyte count normalized during the first month of therapy but gradually increased thereafter. 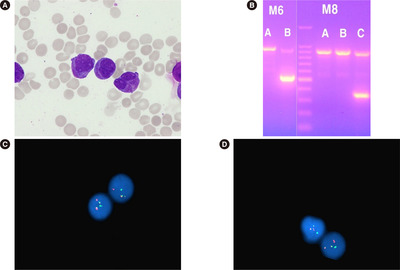 We found three reported cases of promyelocytic BP of CML with and rearrangements that have been reported after the introduction of TKI therapy (Table 1) [1-3]. All reported patients were primarily diagnosed as having CML, CP and immediately started on TKI therapy for which they showed good response. The time to progression into promyelocytic BP after starting treatment varied from six to 16 months. In contrast, our patient’s condition aggravated to promyelocytic BP just two months after starting treatment; therefore, the time was insufficient to evaluate the response to TKI therapy. Most patients showed increased hypergranular abnormal promyelocytes, and immunophenotypes were typical for APL. The quantities of fusion transcripts of and were variable, but the proportion of fusion signals in FISH were high in all cases.

The following mechanisms have been suggested for disease progression from CML, CP to common BP despite TKI therapy: competitive advantage to Philadelphia-negative cells with genetic instability, chromosomal aberrations, and mutations of tumor suppressor genes and oncogenes [5, 6]. Specific risk factors for disease progression to promyelocytic BP of CML have not been identified so far. Few studies have suggested selective suppression of the Philadelphia-positive clone by TKI and TKIinduced chromosomal aberrations [1, 3]. The longer the delay in starting TKI therapy, the more the cells exposed to genomic instability [5]. This finding suggests that clones may have already existed with the clone before the initiation of TKI therapy and may have multiplied rapidly during TKI therapy, which only killed the clone, although we could not confirm the presence of a clone in the sample used for primary diagnosis.

In conclusion, disease progression of CML to promyelocytic BP should be considered when (1) and rearrangements are detected simultaneously and (2) sudden changes in leukocyte counts or bleeding symptoms occur despite TKI therapy, which could be an important clue suggesting disease progression to promyelocytic BP rather than adverse effects of TKI.

Kim B designed the study and wrote the manuscript. Chi HY analyzed and interpreted the molecular tests. Yoon YA and Choi YJ interpreted the results of laboratory tests and participated in discussion. All authors read and approved the final manuscript.

This study was supported by the Soonchunhyang University Research Fund.