A Case of Acute Myeloid Leukemia With inv(16)(p13.1q22);CBFB-MYH11 Presenting With Faggot Cells

Unlike in other acute myeloid leukemias (AMLs), in acute promyelocytic leukemia (APL), bleeding is the most common cause of early death. Thus, prompt treatment of patients with APL is necessary, and a presumptive APL diagnosis should be made, with immediate administration of all-trans retinoic acid (ATRA), which induces promyelocyte differentiation and can thus prevent coagulopathy, lowering mortality rate [1]. Faggot cells are immature cells with Auer rod bundles in the cytoplasm, characteristic of APL but have rarely been found in other AML types, including myelodysplastic syndrome [2-6]. We report an AML case presenting with several faggot cells in the bone marrow, which had caused a prompt ATRA treatment but was later diagnosed as concurrent AML with inv(16)(p13.1q22). The Institutional Review Board of Soonchunhyang University Hospital, Seoul, Korea, approved this study (IRB File No. 2020-05-020).

In January 2020, a 65-year-old woman complaining of sudden abdominal pain and diarrhea, was admitted to Soonchunhyang University Hospital. Initial complete blood counts were: Hb, 64 g/L (120–160 g/L); platelet count, 43 × 109/L (130–450 × 109/L); and white blood cell count (WBC), 7.4 × 109/L (4.0–10.0 × 109/L). Coagulation test results were within normal range, except for the slightly prolonged prothrombin time at 12.4 sec (9.3–11.6 seconds). The peripheral blood smear showed 9% blasts based on all WBCs and bone marrow aspirate smear revealed 45.9% blasts, including 20.6% promonocytes, which have a morphologic picture resembling promyelocytes, based on ANCs. A variety of faggot cells (Fig. 1A, 1B, and 1C) were observed, with occasional observation of abnormal eosinophils. Most blasts were found to be positive for both myeloperoxidase and alpha-naphthyl acetate esterase on cytochemical staining. 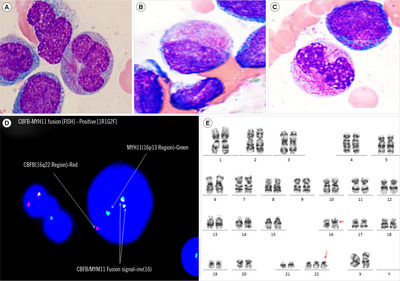 Cytogenetic analysis revealed 47,XX,inv(16)(p13.1q22),+22 [17]/46,XX[3] (Fig. 1E). The p.Asp816His variant in represented 32.0% of the total depth in targeted next-generation sequencing (Customized panel, designed by Celemics, Inc., Seoul, Korea; NGS platform, Illumina MiSeq DX, San Diego, CA, USA). Based on these findings, the patient was diagnosed as having AML with inv(16)(p13.1q22);, and a standard AML induction chemotherapeutic regimen, including idarubicin and cytarabine, was started. After a month of induction chemotherapy, bone marrow examination showed that the patient achieved complete hematologic and cytogenetic responses, without faggot cells. The patient is currently well and undergoing consolidation therapy.

Faggot cells presence in AML with recurrent genetic abnormalities (by 2017 WHO classification) other than APL has been mainly reported to accompany core binding factor (CBF) variants, especially, t(8;21) and inv(16) [4-7]. CBF variants cause CBF complex decomposition to block cell differentiation. In addition to ours, three AML cases with faggot cells accompanied by inv(16) have been reported [4-6]. Two cases were AML with inv(16) harboring a variant, as in our case [4, 5], and the other case was therapy-related AML with inv(16)(p13. 1q22) in a patient treated for HIV infection and Hodgkin lymphoma [6]. Clinical features and hematologic findings of these cases and ours are summarized in Table 1.

Faggot cells presence is not sufficient for APL diagnosis, but there is diagnostic value of faggot cell detection in APL for ATRA treatment in the early disease stage to prevent coagulopathy, since APL has a high mortality rate due to disseminated intravascular coagulation [8]. In line with our case, trisomy 22 in AML with inv(16) was reported to have favorable prognosis; however, presence of a (p.Asp816His) variant in AML may have adverse prognostic significance [9]. To investigate the prognosis of non-APL AML with faggot cells, further studies may be needed.

In summary, we report a rare AML case with inv(16)(p13.1q22); CBFB-MYH11, resembling APL due to faggot cell presence. While prompt treatment with ATRA is crucial for APL, final diagnosis should be made carefully. Accurate diagnosis based on a combination of additional laboratory findings is recommended, since AML subtypes differ in disease progress, treatment choice, treatment response, and prognosis.

This work was supported by Soonchunhyang University research funding (SCH 2020-05-020).