Jumping translocations (JTs) are rare but recurrent cytogenetic abnormalities in hematological malignancies and solid tumors [1]. Of the JTs reported in hematological malignancies, those involving chromosome 3q are the second most frequently observed donor segment [2-4]. However, to date, the impact of JTs involving 3q13.3 on the pathogenesis of leukemia has not been elucidated [4]. We describe the first RNA-sequencing (RNA-seq) data of a acute myeloid leukemia (AML) patient with a JT involving 3q13.3 and trisomy 8 to investigate the structural variation and altered gene expression associated with JTs involving 3q13.3. The Institutional Review Board (IRB) of Samsung Medical Center, Seoul, Korea, approved this study (IRB No. SMC 2020-02-145-001). Informed consent for genetic studies were obtained from the patient before his death.

The patient was a 72-year-old man who was referred for a bone marrow (BM) study at Samsung Medical Center in April 2018 owing to the observation of 30% blasts on a peripheral blood smear. The BM study revealed 66% of blast cells with monocytoid differentiation. The patient was diagnosed as having AML, not otherwise specified, subtype acute monocytic leukemia. The patient was treated with decitabine for induction therapy due to his age; however, he died during the re-induction therapy owing to leukostasis and tumor lysis syndrome. 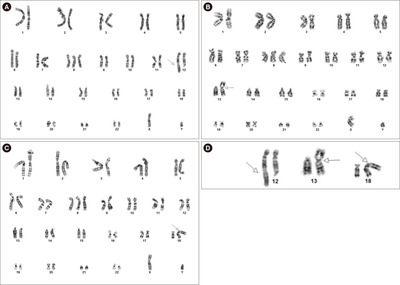 RNA-seq was performed to analyze the structural changes formed via the JT. A breakpoint resulting in a fusion between exon 1 located on chromosome 3q13.31 and the intergenic region located at genomic position chr3:117,716,029 was observed (Fig. 2). The breakpoint was localized near the 3´ end of exon 1, spanning the 5´ untranslated region and the start codon of the gene. 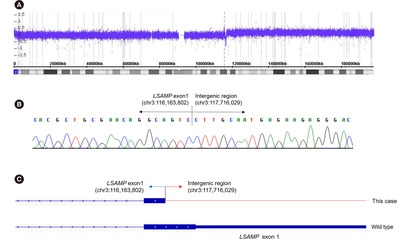 Figure 2. The fusion transcript of the JT involving 3q13.3 identified by RNA-sequencing analysis and Sanger sequencing. (A) Chromosomal array demonstrating the breakpoints corresponding to an interstitial deletion of 3q13.31 and a gain in 3q13.32-q29. (B) Partial sequences surrounding and the intergenic region fusion showing the junction of exon 1 and the intergenic region (chr3:117,716,029). (C) Schematic diagrams of genomic breakpoints mapped with blue and red arrows indicating each breakpoint. The thick blue boxes represent the coding exon and 5´ untranslated region. The thin red line represents the DNA introns and intergenic regions.
Abbreviation: JT, jumping translocation.

JT-caused truncation or loss of the gene located near the donor chromosome breakpoint has been observed [6]. is a putative tumor suppressor gene, previously reported to be inactivated by recurrent deletion and translocation in various cancer types [7-10]. Although is mostly downregulated [7-10], Yen, [9] reported that the correlation between deletion and expression varied depending on the isoforms measured. In our study, upregulation was detected, and its expression varied between its isoforms, suggesting alternative mRNA transcription or premature truncation. Our data showed the possibility that the rearrangement and aberrant expression could be associated with the pathogenesis of AML with a JT involving 3q13.3.

No potential conflicts of interest relevant to this study are reported.