Metaphyseal dysplasia without hypotrichosis (MDWH, OMIM #250460), a rare phenotype of cartilage-hair hypoplasia (CHH, OMIM #250250) anauxetic dysplasia (AD, OMIM #607095) spectrum disorders, is described as an isolated skeletal dysplasia with no extra skeletal manifestations including hypoplastic hair and defective immunity [1]. Pathogenic variants in RNA component of the mitochondrial RNA-processing endoribonuclease () gene cause CHH-AD spectrum disorders with autosomal recessive inheritance [2]. We report the first case in Korea of a girl with compound heterozygous variants, n.81G > A and n.100C > T, that were diagnosed as MDWH. The Catholic University of Korea St. Vincent’s Hospital Institutional Review Board, Seoul, Korea, approved this study (number: VC20ZASE0064).

A girl aged five years and 10 months was referred to the pediatric endocrine clinic at St. Vincent Hospital for short stature. She was the only child of non-consanguineous parents, born at 40 weeks and one day of gestation by spontaneous vaginal delivery, with a birth weight of 2.85 kg (10th–25th percentile), height of 45 cm (3th–5th percentile), and normal head circumference. The mid-parental height (maternal height, 166 cm; paternal height, 180 cm) was 166.5 cm. Her medical history did not reveal any immunodeficiency warning signs, and she had normal psychomotor development. On physical examination, her weight, measured using a CAS scale (CAS, Seoul, Korea), was 15.9 kg (-2.1 standard deviation score [SDS]) and her height, measured using a Harpenden Stadiometer (Holtain Ltd., Crymych, UK), was 96.4 cm (-4.2 SDS). The upper:lower segment ratio (1.3:1) was higher than the normal range for her age (Fig. 1).

Figure 1. Physical and radiographic features of the patient. (A) The patient’s growth curve shows extremely short stature with poor growth response to growth hormone treatment during the follow-up period. (B) The skeletal radiographic features of this patient revealed subtle cupping and widening at the metaphysis of both metacarpal bones, phalanges, and ulnae, as well as (C) an expanded and irregular costochondral junction in the chest.

At six years and six months of age, after obtaining written informed consent, genomic DNA was extracted from the patient’s peripheral blood leukocytes, and a library was prepared using a custom designed panel (Celemics Inc., Seoul, Korea), which enriches a 616 kb region spanning 62 short-stature-related genes. Massive parallel sequencing was performed using the Illumina MiSeqDx platform (Illumina, San Diego, CA, USA). The targeted gene panel sequencing results revealed two variants in (NR_003051.3:n.81G > A and n.100C > T). Although neither parent consented to be tested for the variants, the two variants were confirmed as compound heterozygous based on the next generation sequencing results using the Illumina MiSeqDx platform. Therefore, the diagnosis was confirmed nine months after the patient’s first visit. variants n.81G > A (previous nomenclature: 80G > A) and n.100C > T (previous nomenclature: c.99C > T) have both been reported in patients with CHH [3, 4] (Fig. 2). 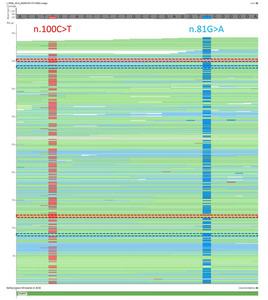 Figure 2. Integrated genome browser snapshot of the RNA component of mitochondrial RNA-processing endoribonuclease () gene variants. The orientation of is in the reverse direction, so that the n.100C > T variant is on the left and the n.81G > A variant is on the right. The distance between both variants is 19 bp, meaning that many of the variants exist on the same sequence reads, thus confirming the compound heterozygosity of the two variants. The red dotted boxes indicate sequence reads with only the n.100C > T variant, while the blue dotted boxes indicate sequence reads with only the n.81G > A variant.

The global incidence of MDWH is unknown; to date, only 20 MDWH patients have been confirmed by analysis [5-8]; over 90 variants have been identified in CHH-AD spectrum disorders [9]. Although the genetic and molecular background of the genotype-phenotype correlation in patients with variants is unclear, the position of the pathogenic variants in the transcript and the proposed effect on transcript folding and RNA/protein interaction result in the variable phenotypes observed in CHH-AD spectrum disorders [10]. As MDWH patients are deemed mildly affected, clinicians do not always consider potential extraskeletal complications. However, a study reported serious late onset bone marrow failure and cancer risks in MDWH patients [6]. Clinicians should consider mild-phenotype MDWH, even in patients exhibiting only short stature.