*These authors contributed equally to this study.

The genus comprises 12 species, some of which cause human diseases. widely exists in poultry and rodents and has occasionally been reported in humans wherein it has been confirmed as a causative agent of pulmonary and digestive infection, and bacteremia, almost invariably in patients with immunodeficiency [1,2]. Only 11 cases of human infection have been reported to date, and none has been found in Asia (Table 1). However, the clinical and epidemiologic characteristics of infection remain to be determined. Here, we describe the first Asian case of pneumonia to highlight the pathogenicity of this bacterium. As this case was identified during a routine surveillance organized by the Centers for Disease Control and Prevention, the need for ethical approval for the present study was exempted by the Institutional Review Board of Chengdu Fifth People’s Hospital, China; verbal consent was obtained from the patient for case presentation.

A 67-year-old woman was admitted to the Neurological Intensive Care Unit in Chengdu Fifth People’s Hospital on January 8, 2013 because of fatigue and loss of the abilities to stand, walk, and speak clearly. Computed tomography (CT) showed spontaneous intracerebral hemorrhage involving the ventricles of the brain. The patient had been suffering from type 2 diabetes in the past year but had no other remarkable medical history. After admission, she received symptomatic treatment, supplementary fluids, and antihypertensive treatment. She developed fever on the third day. Her vital signs included a temperature of 38°C; blood pressure, 148/70 mm Hg; pulse, 84 beats/min; and respiratory rate, 27 breaths/min. Routine blood examination showed a leukocyte count of 9.27×109/L; neutrophil percentage, 88.1%, lymphocyte percentage, 6.5%; platelet count, 91×109/L; and high sensitive C-reactive protein level, 28.9 mg/L. Chest CT examination showed scattered turbidity in both lungs. Therefore, a pulmonary infection was suspected and intravenous cefmetazole (1.5 g daily) was empirically selected and initiated. The patient’s condition improved, and she was discharged on January 15, 2013.

The blood culture result was negative. Direct gram staining and microscopic examination of the sputum revealed gram-negative rods in the neutrophils. After 18 hours incubation at 35°C, colorless colonies were detected on blood, chocolate, and MacConkey agar plates, which were all gram-negative rods. One isolate from each plate was selected for identification. Initial identification performed using the API 20NE strip (bioMérieux, Lyons, France) classified the isolate as with a 96.6% confidence, which could not be used to distinguish species in the genus . The selected isolate from the blood agar plate, designated strain A2799, was subject to further identification using matrix-assisted laser desorption/ionization time-of-flight mass spectrometry (MALDI-TOF-MS) (Bruker, Leipzig, Germany) and 16S rRNA gene sequencing. Both methods classified this strain as . Antibiotic susceptibility testing was performed using the Kirby-Bauer method. The strain was found to be susceptible to the most commonly used antibiotics, and our patient recovered well through therapy with cefmetazole, which is similar to cefoxitin and ceftazidime, to which the strain was found to be susceptible.

Furthermore, the whole-genome sequence of A2799 (GenBank accession no. SRP081450) was obtained. Phylogenetic trees were constructed using a distance matrix based on the presence or absence of genes (pan-genome tree) and single nucleotide polymorphisms in the core genome (core-genome tree) for A2799 and 27 other (Fig. 1). In both trees, A2799 clustered with two strains and with B. pseudohinzii, further suggesting that A2799 is . The three “classical” species, , , and , were closely associated in both the pan-genome and core-genome phylogenetic trees, indicating that these three species were derived from a recent common ancestor (Fig. 1). 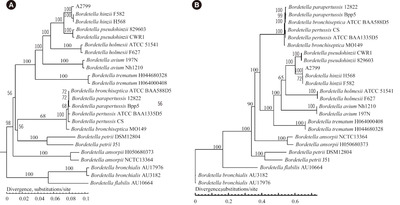 Our patient had been suffering from cerebral hemorrhage but had no history of physical injury or trauma on admission. In patients with infections, the medical history often reveals a recent exposure to poultry. However, there was a history of avian exposure for this patient. Thus, the exact nature of the exposure in our patient remains unknown.

The identification of was inconclusive or inaccurate with a biochemical identification system, consistent with a previous case [1]. 16S rRNA gene sequencing and routine MALDI-TOF-MS are reliable for identifying [1]. Furthermore, whole-genome sequencing is increasingly being applied to identify clinical microorganisms. Therefore, it is likely that some species that could not previously be identified by traditional biochemical methods will increasingly be discovered. infection is rare but potentially fatal. However, antibiotic therapy often results in a favorable outcome.

This work was supported by grants from the Priority Project on Infectious Disease Control and Prevention (grant numbers 2017ZX10303405-002 and 2018ZX10201002-005) from the Ministry of Science and Technology of the People’s Republic of China.