*These authors equally contributed to this study.

Targeted RNA-sequencing (RNA-seq) using next-generation sequencing (NGS) technology is a highly accurate method for selecting and sequencing specific transcripts of interest [1]. We routinely applied a customized targeted RNA-seq system during the diagnostic phase of hematologic malignancies. Our system detected the first Korean case of and a novel fusion with therapy-related acute myeloid leukemia (t-AML) showing a dismal clinical course. accounts for approximately 4% of pediatric AML cases and shows a poor prognosis [2, 3]. It could be created by a cryptic t(5;11)(q35;p15.5) and exerts a leukemogenic function by binding near the locus and to increase expression via histone modifications [4]. The Institutional Review Board of Chonnam National University Hwasun Hospital (CNUHH), Hwasun, Korea (CNUHH-2020-091) approved this study and granted a waiver of consent due to its retrospective nature. This report highlights the role of high-throughput parallel targeted RNA-seq in enhancing the diagnostic yield of hematologic malignancies.

Targeted RNA-seq (HEMEaccuTest RNA; NGeneBio, Seoul, Korea) of the BM sample using STAR-Fusion (ver 1.8.1) and FusionCatcher (ver 1.20) revealed and a novel fusion, which were confirmed by direct sequencing (Fig. 1). DESeq2 (ver 1.18.1) analysis showed that , , and expression increased 7.1, 5.6, and 4.1-log2-fold, respectively, compared with 14 normal controls (Table 1). An additional tier II variant of , NM_024426.3:c.1142C>A (p.Ser381*), and three tier III variants were detected by FreeBayes (ver 1.3.1) [5]. Further targeted DNA NGS (HEMEaccuTest DNA) confirmed the variants in targeted RNA-seq and additionally detected a tier II variant of , NM_033360.4:c.38G>A (p.Gly13Asp), and five tier III variants. However, no significant variant of , including -ITD, was detected. Donor lymphocyte infusion (DLI) was conducted on day 7 after the diagnosis; however, the BM blasts increased to 88% on day 29. The combination of fludarabine, cytarabine, idarubicin, and granulocyte colony-stimulating factor chemotherapy was started on day 35 and the BM blasts decreased to <5% on day 71 with sustained thrombocytopenia; however, the condition repeatedly relapsed on day 134 and the patient expired on day 223.

Table 1 . Morphological, phenotypic, cytogenetic, and molecular characteristics of the initial and present phase of the case 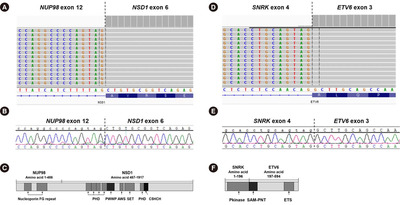 + AML is characterized by frequent FAB-type M4/M5, a normal karyotype, and upregulation [2]. Further, is mutually exclusive with other type II variants, but often co-occurs with type I variants such as -ITD or variants [2, 3]. -ITD is the most common variant in + AML (unlike our case), and its prognosis is dismal. Recent studies showed the promising therapeutic effects of dasatinib and navitoclax combination therapy and preemptive DLI based on minimal residual disease for +/-ITD+ AML [6, 7]. Regarding the novel fusion, the defect in ETV6 is pathogenic in hematologic malignancies caused by rearrangement or deletions [8]. However, the partner gene defect at 3p22.1 has rarely been studied in hematologic malignancies but reportedly impacts hematopoietic cell proliferation and differentiation [9]. Further studies are needed to clarify the role of this novel fusion. This case also meets the criteria of t-AML, representing del(5q) with a complex karyotype and prior cytotoxic chemotherapy; both - and - rearrangements were reported in t-AMLs [10]. Additionally, the patient has a variant in (rs1042522), known to increase the risk of developing therapy-related myeloid neoplasms. Owing to the retrospective nature of this study, the and status at the initial diagnostic phase could not be ascertained.

Compared with previous studies using multiple diagnostic methods to characterize + AML [2], the advantage of the present case was the use of RNA-seq, representing a simplified diagnostic step for gene fusion, expression, and gene variant analyses. Additionally, this system might help uncover novel genetic characteristics in leukemias in future larger-scale studies.

Lim HJ and Lee JH conceived and designed the study and collected and analyzed the data; Baek HJ and Kook H contributed to the data; Lim HJ and Shin MG wrote the final manuscript; Lee YE, Park JH, Lee SY, Choi HW, Choi HJ, Kee SJ, and Shin JH participated in coordination and discussion. All authors have accepted their responsibility for the entire content of this manuscript and approved the submission.

This research was supported by the National Research Foundation of Korea (NRF) grant funded by the Ministry of Science and ICT (MSIT) and the Ministry of Health and Welfare (MOHW) (NRF-2019M3E5D1A02067952).