Seventy-seven discarded and de-identified lithium heparin-anticoagulated plasma samples with a hemolysis index ≤10 μmol/L and corresponding EDTA-anticoagulated whole blood samples (i.e., from the same patient and sampling time) used for routine patient care were collected randomly and retrospectively over a six-month period (July to December 2019). These samples had already been transported from the clinical units and general practitioners to the laboratories of the University Medical Center Groningen and Isala and had undergone centrifugation (1,885× for 5 minutes at 18°C), thus excluding a significant effect of either hemoglobin or folate from RBCs due to hemolysis. Hemolysates were prepared according to the osmotic shock procedure adapted from the CLSI guidelines (EP7-A2 and EP56) for interference analysis in clinical chemistry [6, 7]. Briefly, RBCs from 0.5 mL of whole blood were washed twice with a standard phosphate-buffered saline solution (VWR, Radnor, PA, USA) and hemolysates were obtained by adding 1 mL distilled water. Thereafter, all samples were stored in a dark container immediately at -80°C for at least 24 hours and were centrifuged before use.

Hemolysis was simulated by spiking the plasma samples with their corresponding hemolysate. To avoid any potential matrix effect, a three-level dose–response series was prepared for each patient by adding 2 μL (level 1), 4 μL (level 2), and 10 μL (level 3) of hemolysate to 198 μL, 196 μL, and 190 μL of plasma, respectively. The folate concentration and hemolysis index were analyzed at the University Medical Center Groningen on two Cobas 8000 platforms with c702 and e602 modules (Roche Diagnostics), and increments were calculated relative to the blank (i.e., unspiked) plasma. The CVfolate was 9.6% at a concentration of 6.3 nmol/L. Samples above the upper detection limit (folate >45.4 nmol/L) were excluded. The hemolysis index had a CV of 3.3%.

Hematology parameters [i.e., hemoglobin, RBC, mean corpuscular volume (MCV), and white blood cell count (WBC)] were measured on an XN-10 analyzer (Sysmex Corporation, Kobe, Japan). For hemoglobin and MCV, the inter-assay CV was 1.1% and 0.9%, respectively. Data analyses and computations were performed using SPSS 22.0 (IBM Corp., Armonk, NY, USA) and GraphPad Prism version 5.01 (GraphPad Software, San Diego, CA, USA). All data are presented as the median and interquartile range (IQR), because they were considered to be non-normally distributed. The potential influence of sample transportation, centrifugation, and cellular constitution (notably WBCs, which may alter the plasma fluid fraction [8] and may also contain folate [9, 10]) on baseline folate concentrations, and the potential associations of the baseline hemolysis index, RBC, and WBC with baseline folate concentration were analyzed using univariate and multivariate linear regression analyses.

Table 1 . Associations of plasma folate concentration with the hemolysis index and red and white blood cell counts in patient samples

Based on the combined analytical variation of the folate assays (9.6%), a CDfolate of 22% was calculated. The linear function describing the relationship between the increment in folate concentration (x) and hemolysis index (y) was defined as y= 1.86x + 1.56 (R2 = 0.996). The equation yielded a hemolysis threshold of 42 μmol/L for our laboratory. These data extend the existing literature [11] by providing a tangible approach for defining the acceptable degree of hemolysis, which considers the biological variation of plasma folate, RBC folate, and hemoglobin concentration. Our approach considers the fact that the hemolysis threshold is dependent on the analytical variation of the folate assay and may differ across laboratories. 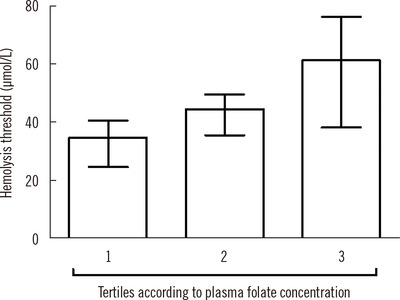 This study has several limitations. First, we only assessed plasma samples. Therefore, the suggested approach for calculating a hemolysis threshold should be used only when routine folate concentration is measured in plasma. Second, our data are based on the assumption that hemolysis assays represent everyday conditions of hemolytic samples transported from clinical units. Despite the swift preparation of hemolysates with a dose–response series and a single freeze–thaw cycle, we cannot fully exclude the possibility that a certain loss of reduced folates or incomplete dissociation of folates from cellular binding proteins may have occurred during preparation of the hemolysates [16]. However, both situations would also hold true in the case of hemolysis occurring during the day-to-day transport of plasma samples. Thus, the hemolysis assays performed in this study are likely a good reflection of the sample conditions in routine practice. Third, we did not have information on RBC folate concentrations because RBC folate is not a routine diagnostic modality in the Netherlands. However, this parameter may be useful when plasma and RBC concentrations are discordant or when patients consistently produce hemolytic plasma samples [17].

In conclusion, the relationship between the degree of hemolysis and change in plasma folate concentration can be approximated with the equation y= 1.86x+1.56, where x and y represent the laboratory-specific CDfolate and hemolysis threshold, respectively. The calculated hemolysis threshold can be used in-

dependent of the patient’s folate status.