* These authors contributed equally to this study.

Botulism is a neuroparalytic disease caused by the seven immunologically distinct toxins (A to G) produced by , a gram-positive, anaerobic, spore-forming bacterium [1, 2]. Botulinum toxin types A, B, E, and F cause botulism in humans [2]. There are three main forms of botulism: foodborne botulism, infant botulism, and wound botulism [3]. From 2002 to June 16 2019, eight cases of human botulism have been reported in Korea, and all were presumed to be foodborne botulism [4–6]. In the USA, more than 1,500 cases of infant botulism have been confirmed between 1976 and 2007 [7]. By contrast, in Korea, the first documented case of infant botulism was reported in 2019, after botulism was designated as a notifiable infectious disease in 2002 [8]. In addition, no strains with two toxin gene clusters have been reported in Korea. This study aimed to characterize the strain CB-27 isolated from a stool sample from the first case of infant botulism in Korea. We found that the strain possessed two different toxin gene clusters, showing genetic diversity compared with other previously reported strains.

On June 7, 2019, a 4-month-old Korean baby with suspected infant botulism was admitted to Ajou University Hospital, Suwon, Korea, and on June 13, clinical samples, including serum and stool samples, were submitted to the Korea Centers for Disease Control and Prevention (KCDC) to identify and its toxins [8]. We conducted a mouse bioassay to identify botulinum toxins in the stool and serum samples [9]. Based on neutralization of sample toxicity by monovalent antitoxin A (National Institute for Biological Standards and Control, Potters Bar, UK), only the stool sample was positive for botulinum neurotoxin (boNT) A.

A small amount of the stool sample was inoculated into cooked-meat medium (Difco, Franklin Lakes, USA) and cultured under anaerobic conditions at 37°C for three days. The culture was mixed 1:1 with 100% ethanol and incubated at 37°C for 1 hour. Serial culture dilutions were plated on egg yolk agar under anaerobic conditions to isolate . Five lipase-positive colonies were isolated, and DNA was extracted from each strain using a genomic DNA isolation kit (Intron Biotechnology, Seongnam, Korea). We analyzed botulinum toxin genes by real-time PCR using previously reported primers [10, 11]. As all strains were positive for both and genes, we selected the first isolated strain, named “CB-27,” and cultured it in trypticase peptone glucose yeast extract medium (KisanBio, Seoul, Korea) at 37°C for 24 hours. This study was exempted from the approval by the Institutional Review Board of the KCDC because clinical bacterial strains were used.

The culture filtrate of strain CB-27 was diluted 1:10,000 in phosphate-buffered saline containing 0.2% gelatin and then analyzed using a mouse bioassay. The mice were injected with 0.05 international units of botulinum antitoxins A and B (National Institute for Biological Standards and Control, Potters Bar, UK). Botulinum antitoxin A and a mixture of antitoxins A and B showed neutralizing ability against the CB-27 culture filtrate (Table 1) in accordance with the mouse bioassay results obtained using stool samples.

To phylogenetically characterize the toxin gene clusters of CB-27, we downloaded sequence data of 240 strains representing different toxin types and subtypes from Pathosystems Resource Integration Center (PATRIC) (https://www.patricbrc.org) [14]. All-against-all pairwise sequence comparisons were conducted using Basic Local Alignment Search Tool (https://blast.ncbi.nlm.nih.gov/) to determine the closest relatives of CB-27. Multiple sequence alignments were conducted using MAFFT version 7.453 (https://mafft.cbrc.jp/alignment/software/), with a maximum of 1,000 iterations. We constructed maximum-likelihood phylogenetic trees using RAxML-NG version 0.9.0 (https://github.com/amkozlov/raxml-ng) with TVM+F+G4, the best nucleotide substitution model recommended by ModelFinder [15, 16]. The nucleotide sequence of CB-27 was identical or highly similar to the sequences of previously reported subtype A1 strains, including CDC_69094 (100%) and ATCC 3502 (99.95%) (Fig. 1A). The sequence of CB-27 showed 100% identity with that of CDC_69094 (Fig. 1B), which contains a nucleotide substitution that can lead to premature termination of at amino acid position 128 [17]. 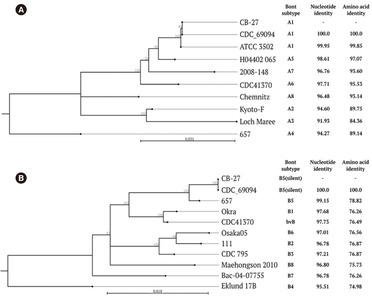 In conclusion, we characterized the toxin gene clusters of strain CB-27 isolated from the first case of infant botulism in Korea in 2019. The CB-27 genome possesses and unexpressed . Although the nucleotide sequences of the toxin gene cluster of CB-27 showed a 0.47% difference from that of CDC_69094, the sequence of the complete genome of CB-27 strain may show a larger difference. Further analysis using whole genome sequencing of CB-27 will be needed to confirm this notion.

The authors have declared no conflicts of interest.