Burkitt-like lymphoma with 11q aberration (BLL-11q) is a new provisional classification in the revised fourth edition of WHO classification of lymphomas that resembles Burkitt lymphoma (BL) morphologically and phenotypically, but has unique features, including gains in 11q23.2–23.3 and losses of 11q24.1–qter, with no translocation [1]. BLL-11q predominantly occurs in young adult males, and characteristic cytogenetic features have been frequently observed in post-transplant patients [2–4]. However, the association between BLL-11q and immune deficiency remains unclear due to the limited number of cases [2, 4–6]. We report a case of BLL-11q with HIV co-infection in East Asia, and review previous cases of BLL-11q with immunodeficiency. The Institutional Review Board of Samsung Medical Center, Seoul, Korea, approved this study (IRB No: SMC-2020-05-125) and waived the need for informed consent. 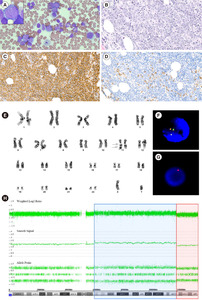 After five cycles of chemotherapy over four months, together with markedly improved imaging findings and no involvement of lymphoma in the follow-up BM study, the patient achieved remission. After four months of antiretroviral therapy, HIV RNA was below the detection limit, with an increase in CD4+ T cells by 316 cells/μL.

To the best of our knowledge, this is the first case of BLL-11q accompanied by HIV infection in East Asia. We identified the 11q aberrations by cytogenetic studies, suggesting that these technical approaches may be useful for the diagnosis of BLL-11q.

Even though flow cytometry indicated mature B-cell lymphoma in our case, there was no expression of surface immunoglobulins. Surface immunoglobulin light chain-negative B-cell non-Hodgkin lymphomas (NHLs) as well as lymphomas in HIV-infected patients tend to be clinically aggressive [6–8]. However, our patient had a good performance status with an Eastern Cooperative Oncology Group performance score of 0, with no systemic symptoms. These features may support the favorable outcome of BLL-11q.

As previously reported in BLL-11q [5], we detected variants in , and , which are frequently found in diffuse large B-cell lymphomas (DLBCL), but not in BL. This corroborates that BLL-11q has similar clinicopathological and immunophenotypic features as BL, but different molecular features. Thus, the hypothesis that BLL-11q is a discrete entity of high-grade B-cell lymphoma (HGBCL) rather than a subdivided entity belonging to BL needs to be considered.

The relationship between BLL-11q and immunocompromised conditions has not been fully evaluated [5]. A literature review revealed seven cases of BLL-11q in immunodeficient settings (Table 1). These cases occurred strictly in males, as women are protected by estrogens against the proliferation of B-cell NHLs [9]. Interestingly, all cases with HIV infection, including our patient, showed either an advanced tumor stage or an aggressive clinical course, but had a good response to chemotherapy.

Table 1 . Summary of the clinicopathological features of cases of Burkitt-like lymphoma with 11q aberration with immunodeficient status

The optimal therapy for BLL-11q remains controversial. Despite the poor prognostic factors in our patient, such as advanced-stage disease, BM involvement, and low absolute lymphocyte count, low-intensity chemotherapy (DA-EPOCH-R) was effective. These outcomes strengthen the favorable prognosis of BLL-11q and suggest consideration of dose-reduced therapy for this subgroup of lymphomas [3, 10].

Our study results suggest that detailed histopathological and cytogenetic studies are especially important in young patients with underlying immunodeficiency who exhibit morphologies of BL, DLBCL, and HGBCL. The favorable prognosis of BLL-11q emphasizes the significance of accurate diagnosis in such cases. Further research will be needed to elucidate the molecular pathogenesis of and optimal therapeutic strategies for this malignancy.

Kim JA wrote the manuscript. Kim SJ managed the patient and provided the clinical information. Kim HY, Kim HJ, and Kim SH contributed to the interpretation of the results and revision of the manuscript.