Myelodysplastic syndrome (MDS) is a diverse hematological malignancy with a wide spectrum of presentations and implications. Treatment strategies for patients with MDS heavily rely on prognostic scoring systems, such as the revised international prognostic scoring system (IPSS-R). Bone marrow fibrosis (BMF) has been identified as an independent risk factor for poor survival in patients with MDS, irrespective of the IPSS-R risk category. However, BMF is not widely included in scoring systems and is not always considered by clinicians when making treatment decisions for patients. In this review, we discuss the available literature about the presentation and prognosis of patients with MDS and concurrent BMF. The prognostic impact of BMF should be factored in when deciding on transplant candidacy, especially for intermediate-risk patients.

The stromal microenvironment of the bone marrow (BM) comprises structural fibrils that provide connective tissue structure and support for hematopoietic progenitor cells. Reticulin and collagen type I/III are the most common BM fibers [1]. BM biopsy sections can be assessed for the presence of these stromal fibers to evaluate the extent of fibrosis using a silver impregnation technique called Gomori’s stain [2]. A pathological increase in BM fibrosis (BMF) reportedly has both clinical and prognostic significance in various hematological malignancies. In chronic myeloid leukemia and multiple myeloma, BMF portends decreased responsiveness to most commonly used treatments [3, 4]. In primary myelofibrosis (PMF), the higher the fibrosis grade, the poorer the prognosis [5]. In patients with essential thrombocythemia, increased reticulin fibrosis predicts an increased risk of thrombosis, major bleeding, and transformation into myelofibrosis, and in patients with polycythemia vera, it is associated with worse outcomes [6].

Myelodysplastic syndrome (MDS) is a heterogenous hematological malignancy with a wide spectrum of clinical presentations. MDS is characterized by dysplasia in one or more BM cell lineages and/or ineffective erythropoiesis. In 1981, Sultan, . [7] first described eight cases of MDS with BMF at presentation. The disease presentation described was later included in the category of acute myeloid leukemia (AML), not otherwise specified as acute panmyelosis with myelofibrosis [8]. In 1989, Pagliuca, . [9] described 10 cases of primary MDS with striking BMF at presentation. Since then, multiple case reports, case series, and retrospective studies have reported MDS with fibrosis (MDS-F). MDS-F accounts for 10%–20% of MDS cases [10-13].

The risk stratification scale of the revised international prognostic scoring system (IPSS-R) for MDS ranges from very low risk to very high risk [14]. The IPSS-R utilizes cytogenetics, BM blasts, and laboratory parameters, including Hb, platelets, and absolute neutrophil count (ANC), at diagnosis [14]. BMF is not included in the IPSS-R for determining the risk category and prognosis. In addition, the clinical relevance of BMF was not recognized in the 2008 WHO classification [15]. The 2016 WHO classification identified MDS-F as an unclassified MDS subtype [8]. Moderate to severe BMF in MDS is closely associated with multilineage dysplasia, transfusion dependence, and severe cytopenia [11, 16, 17]. Overall survival (OS) is inferior in MDS patients with moderate to severe BMF. Poorer OS has been attributed to greater BM failure or a higher rate of leukemic transformation [10]. In patients with MDS who proceed to a hematopoietic allogeneic stem cell transplant (alloSCT), moderate to severe BMF is an independent risk factor for an inferior event-free survival. Delayed engraftment post alloSCT has been reported in MDS patients with any degree of BMF [18]. BMF can be seen in the initial diagnostic marrow or sometimes can develop during the course of MDS or after treatment. In a study by Fu, . [12], out of 551 patients with no significant BMF at diagnosis, 17 (4%) patients developed BMF during follow-up, and the median time to development of BMF was 22 months.

While the pathophysiology of BMF is not well understood, some theories suggest increased cytokine production from megakaryocytes and platelets, which reportedly are higher in patients with BMF [19]. Cytokine transforming growth factor-β has been suggested to be a potent stimulator of fibroblast collagen synthesis [19]. Other cytokines implicated in the pathophysiology of BMF include platelet-derived growth factor, calmodulin, and basic fibroblast growth factor [20]. Spliceosome and RAS pathway mutations have been implicated in the pathogenesis of BMF in patients with MDS [21]. However, it is clear that the BMF seen in MDS is a reactive process and that the fibroblasts present in the BM responsible for the fibrosis are not monoclonal [19]. We describe patients with MDS with BMF and their diagnosis, management, and prognosis.

Before 2005, the BMF grading was subjective, and pathologists used various grading systems [1]. In 2001, Steensma, . [20] attempted to define MDS-F. They used the Manoharan scale and recommended that only patients with grade 3+ or 4+ be diagnosed as having MDS-F [22]. In 2005, the European Myelofibrosis Network framed a consensus-based proposal for semi-quantitative evaluation of BMF to achieve a higher level of reproducibility in clinical practice [23]. Four categories were introduced to simplify the grading of marrow fibrosis (MF). MF-0 or no fibrosis in normal BM is used for patients with scattered linear reticulin without any intersections (cross-overs). Mild fibrosis (MF-1) is defined as a loose network of reticulin fibers with numerous intersections, particularly in the perivascular areas. Moderate fibrosis (MF-2) is graded when diffuse and dense reticulin with extensive intersections is noted, with focal and occasional bundles of collagen and/or osteosclerosis. In severe or grade 3 fibrosis (MF-3), there can be coarse bundles of collagen (on trichrome stain), frequently accompanying significant osteosclerosis in addition to diffuse and dense reticulin with extensive intersections [17]. MF-0/1 is present in up to 50% of MDS cases [7, 9, 13]. In this review, we discuss the significance of moderate to severe fibrosis (MF-2/3).

There are two types of fibers that contribute to BMF. While an increase in reticulin fibers has a limited association with the severity of the underlying malignancy, collagen fibers are strongly linked with abnormal blood counts and poor outcomes [1]. Reticulin fibrosis is frequently reversed after therapeutic intervention, while collagen fibrosis is less likely to alleviate with therapy [1]. Trichrome stain for collagen fibrosis is not commonly used for MDS-F as it is often, though not always, correlated with reticulin fibrosis (≥MF-2). Fig. 1 shows peripheral blood and BM findings in a patient with MDS-F. BMF is often associated with dry tap which could hinder morphologic assessment of dysplasia. Careful examination of peripheral blood and the slides from bone marrow touch imprint would be helpful. 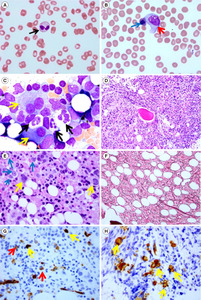 In a study conducted at our institution by Melody, . [25], using our MDS database of 2,624 patients, MF-3 BMF was observed in only 4% of patients. Since preliminary analyses had indicated that only MF-3 affected survival, patients with MF-3 were compared with those with MF-0–2 fibrosis. In line with previous findings [12, 24], we noted that thrombocytopenia and a higher BM blast percentage were common in patients with MF-3 BMF. Interestingly, lactate dehydrogenase levels were higher in MF-3 patients (46% vs. 34%, =0.02).

Ramos, . [26] reported that BMF is positively correlated with ferritin and erythropoietin levels, marrow cellularity, abnormal localization of immature precursors (ALIP), packed red blood concentrate transfusions in the first 16 weeks from diagnosis, p53 immunohistochemistry scores, and peripheral Wilm’s tumor 1 gene expression. Marisavljević, . [27] studied 236 patients with MDS and found that immature cells and blasts in the peripheral blood and BM blasts were more frequently present in patients with MDS-F. In the BM, ALIP, dysmegakaryopoesis, and dyserythropoesis were also significantly higher in patients with MDS-F.

Genotype of primary MDS with fibrosis

Management of patients with fibrotic MDS

Patients with MDS with substantial BMF are treated using similar strategies as those without fibrosis. Supportive care, immunomodulatory agents, hypomethylating agents, induction chemotherapy, and/or alloSCT can be used. Fu, . [12] reported that treatment with hypomethylating agents did not decrease BMF even in patients who attained complete hematological responses, whereas patients who underwent alloSCT showed a complete resolution of BMF.

Wang, . [21], in their recent study in 239 MDS and secondary AML patients who underwent alloSCT, reported that OS and disease-free survival were significantly lower in patients with MF-2/3 than in patients with MF-0/1 (=0.018). BMF was an independent predictor for survival in patients with ≥10% BM blasts at diagnosis, and these patients had improved outcomes if they achieved complete remission before alloSCT.

Table 2 . Studies comparing MDS patients with BMF with those without BMF

Fu, . [12] noted that patients who developed BMF during the course of MDS showed evidence of disease progression on BMF development. The median OS for these patients from the time of BMF development was only nine months. For MDS patients with BMF that go on to receive alloSCT, the 3-year relapse rate was higher in patients with BMF than in those without (47% vs. 28%, =0.04) [34]. Accordingly, Wang, . [35] recently reported that mild to moderate BMF is predictive of a poor clinical outcome.

When the IPSS-R prognostic criteria were first established, BMF was considered a potential factor for determining the prognostic risk. However, it was discounted as an additive factor for predicting survival in MDS because of its low prevalence and discrepancies in the evaluation of the degree of BMF across institutions. We presented evidence that BMF is a poor prognostic variable, even if it is observed during the course of disease. It is recommended that BMF be integrated into currently used risk classification/stratification systems. The presence of moderate to severe BMF in patients with MDS should be accounted for when considering transplantation as a potential treatment strategy in patients with intermediate-risk disease. Future directions include further improving our understanding of the underlying pathobiology of BMF and assessing the impacts of treatments in patients with MDS-F.