Troponin (Tn), a structural protein, is a component of actin-myosin fibers and is involved in calcium-mediated muscle contraction. Among Tns, cardiac (c)TnT and cTnI are often used to diagnose and monitor cardiac diseases as they are specific to cardiac muscles [1, 2]. According to the European Society of Cardiology, American College of Cardiology, American Heart Association, and World Heart Federation Task Force Fourth Universal Definitions of Myocardial Injury and Myocardial Infarction, myocardial infarction can be diagnosed when cTn values are above the 99th percentile of the upper reference limit (URL) values determined in healthy individuals and when at least one cardiac symptom specified in the guidelines occurs [2]. Hence, for rapid and accurate diagnosis of myocardial infarction, it is crucial to measure cTn values accurately and to establish a reference range for cTn based on a strictly selected healthy reference population [3, 4].

Recently, the ADVIA Centaur High-Sensitivity Troponin I assay (Centaur hsTnI) (Siemens, Erlangen, Germany), which is a fully automated version of the Centaur XP TnI-Ultra assay (Centaur TnI; Siemens), and the Atellica IM High-Sensitivity Troponin I assay (Atellica hsTnI; Siemens) were introduced in clinical laboratories. The Centaur TnI and both hsTnI assays are chemiluminescence immunoassays. However, the hsTnI assays newly employ trisulfopropyl acridinium ester, a strong anionic label with very low non-specific binding and the same high light yield that confers the hsTnI assays a 10-fold improvement in low-end precision sensitivity. Additionally, the hsTnI assays are robust, with a high tolerance for common interferents, such as biotin, hemolysis, and alkaline phosphatase. Further, they show an optimal precision of >90% across a measurable range. The two hsTnI assays have subtle differences. The time to first result is 18 and 10 minutes for Centaur hsTnI and Atellica hsTnI, respectively. In addition, the 99th percentile value (for men and women combined and for serum, according to the package insert) is 46.8 ng/L and 45.4 ng/L for Centaur hsTnI and Atellica hsTnI, respectively. Both assays analyze the full cardiac panel, including high-sensitivity TnI (hsTnI), B-type natriuretic peptide (BNP), N-terminal pro-brain BNP (NT-proBNP), myoglobulin, and creatine kinase myocardial band, in a single platform.

We calculated 99th percentile URLs for cTnI for Centaur hsTnI and Atellica hsTnI in a healthy Korean population of sufficient size, meeting the selection criteria suggested by Sandoval and Apple and the AACC and IFCC guidelines [10, 11], to determine the effect of outlier elimination on the 99th percentile URLs. Additionally, we evaluated the performance of Centaur hsTnI, Atellica hsTnI, Atellica IM BNP, and Atellica IM NT-proBNP, all of which can be used to assess cardiac function.

This retrospective observational study was reviewed and approved by the Institutional Review Board (IRB) of Asan Medical Center, Seoul, Korea (approval number.: 2018-0731). As we used residual serum samples that had been used for regular laboratory assays and were completely anonymized, the requirement for informed consent was waived by the IRB.

Residual serum samples bottled in BD Vacutainer Plus Plastic Serum Tubes (BD, Franklin Lakes, NJ, USA) from subjects who visited Asan Medical Center for general health checkups between October 10, 2019 and February 25, 2020 were collected. Within 24 hours after collection, the samples were divided into four 250-μL aliquots in Eppendorf tubes (Eppendorf North America, Enfield, CT, USA) and frozen at –70°C until assaying. At the end of the sample collection, all frozen samples were thawed, vortexed, and centrifuged for analysis. These samples were used to evaluate cTnI 99th percentile URLs. The inclusion criteria for reference population selection and the study flowchart are presented in Fig. 1. 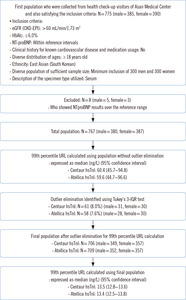 To assess “clinical history for known cardiovascular disease and medication usage,” we reviewed the subjects’ checkup questionnaire data, electronic medical records, and laboratory test results at the time of recruitment to screen those with active or historical cardiac diseases, including acute coronary syndromes, congestive heart failure, myocarditis, ventricular tachyarrhythmias, and percutaneous coronary intervention or cardiac medication use. All subjects also underwent NT-proBNP measurement, which is a criterion for selecting the reference population, to screen out those with current or historical asymptomatic cardiac diseases, as these can cause outliers and may affect the calculation of the 99th percentile URL [14, 15].

Precision was evaluated according to the CLSI guidelines EP5-A3 [16]. Low, medium, and high levels of quality control (QC) materials (Liquichek Cardiac Markers Plus Control, lot numbers 99562, 99563, and 99565; Bio-Rad, Hercules, CA, USA) were used for Atellica IM BNP, Atellica IM NT-pro BNP, Centaur hsTnI, and Atellica hsTnI. Each QC standard was analyzed in duplicate and twice a day (with a ≥2-hour interval between analyses) for 20 days.

Method comparison was conducted according to the CLSI guidelines EP9-A2 [19]. For BNP and hsTnI, Centaur XPT performance was compared with that of Atellica IM. For NT-proBNP, Cobas C8000 (Roche) was used in comparison with Atellica IM. To compare cTnI and hsTnI, Centaur XPT was used. Forty residual serum samples were analyzed separately for each of the four analytes. Data were analyzed using Deming regression, and the slope, intercept, and correlation coefficients (R values) were calculated. R2 ≥0.95 indicated a linear correlation between the two reagents over the comparison experiment range.

Determination of CVs at the 99th percentile URLs

We obtained whole blood samples from two healthy volunteers with informed consent. Serum was separated immediately after blood collection and stored at –70°C. The serum samples were thawed right before use and spiked with residual serum samples that showed high cTnI values to prepare serum pools with TnI values of 26.5–106.3 ng/L. Using the multilevel pools, we generated precision profile plots. Samples with six TnI values spanning the 99th percentile URLs were prepared. The TnI value of each sample was measured 80 times using Centaur hsTnI and Atellica hsTnI. The CVs at each TnI value for each assay were then analyzed according to the CLSI guidelines EP5-A3 [16]. Based on the CVs of the six serum pools, we generated precision profile plots using the Variance Function Program (version 15.0; W. A. Sadler, Christchurch, New Zealand) and calculated the CVs at the 99th percentile URLs for Centaur hsTnI and Atellica hsTnI.

The presence of outliers in data is a major problem and strongly affects 99th percentile URLs [8, 9, 11, 20, 21]. We determined the 99th percentile URLs using the total samples before and after outlier elimination by a one-tailed non-parametric method with 3,000 bootstrap replications and a 95% confidence interval (CI) in SPSS (version 18.0.0; IBM, Armonk, NY, USA). Outliers were identified using Tukey’s 3-interquartile range (IQR) test using the following formula: outlier hsTnI value >Q3+3 IQR, where Q3 and IQR are the third quartile and interquartile range (Q3–Q1) of the hsTnI distribution, respectively [9, 12]. We eliminated outliers manually. Since hsTnI values are higher in older subjects, especially at the reference age of 55 years in the general population, we stratified the reference population by age (≤55 years and >55 years) and determined the 99th percentile URLs for each group [8, 9].

As hsTnI values were not normally distributed, sex- and age-related differences were evaluated using the Mann-Whitney and Kruskal-Wallis tests. hsTnI values are represented as the median and 95% CI [22]. Statistical significance was set at <0.05.

The results of precision analyses are presented in Supplemental Data Table S1. For all assays, the total CV was 2.0%–4.1%. The CVs at the 99th percentile URLs were both <10%, which satisfied the criteria for hsTn assays according to the AACC and IFCC guidelines [11].

After considering the NT-proBNP assay results, five men and three women showed higher values than the aforementioned cutoff values and were excluded from the reference population. We obtained 380 samples from men and 387 samples from women before outlier elimination. Fig. 2 shows the TnI value distribution in the reference population in men and women before outlier elimination. 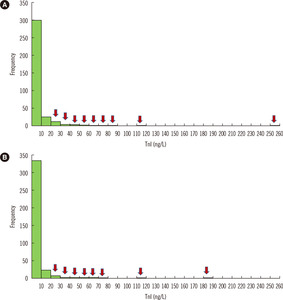 Figure 2. Distribution of TnI values in the reference population, which was selected according to the strict selection criteria suggested by Sandoval, . [10], without outlier elimination. Arrows indicate subjects with outlying TnI values according to Tukey’s 3-IQR method. (A) Men, (B) women.
Abbreviations: TnI, troponin I; IQR, interquartile range.

The hsTnI value distributions according to age and sex in the reference population are shown in Figs. 3 and 4. Overall, hsTnI values were higher in men than in women within the same age group and tended to increase with age. 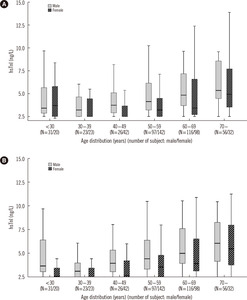 Figure 3. Distribution of hsTnI values in men and women according to age and sex. The box indicates the 25th and 75th percentiles; the black line corresponds to the median value. (A) Centaur hsTnI, (B) Atellica hsTnI.
Abbreviation: hsTnI, high-sensitivity troponin I. 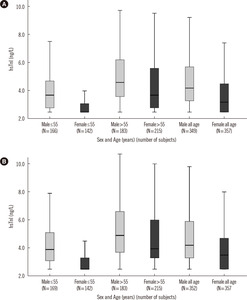 Table 1 . hsTnI 99th percentile URLs according to sex, age group, and before and after outlier elimination.

When comparing men and women stratified according to age (≤55 years vs. >55 years), the hsTnI 99th percentile URLs of Centaur hsTnI and Atellica hsTnI were significantly higher in men aged >55 years than in women aged ≤55 years [8, 9] (<0.001 for both; Fig. 4). The proportion of measurable samples above the limit of detection (LoD) was 91.5% and 93.4% for Centaur hsTnI and Atellica hsTnI, respectively (Table 2).

Table 2 . hsTnI 99th percentile URLs (ng/L), CV% at the URL, and proportion (%) of measurable samples above the LoD for both assays

As shown in Figs. 3 and 4, the average hsTnI values increased with age, particularly at ages ≥55 years. Additionally, hsTnI values were significantly higher in men than in women within the same age groups for both assays. The Mann-Whitney test for comparison of hsTnI values in men and women showed <0.031 for both Centaur hsTnI and Atellica hsTnI. This result may be explained by the possibility of remaining outliers that were not eliminated during statistical analysis, especially in the >55 years age group for both sexes.

We performed the NT-proBNP assay in the reference population to screen for subjects with asymptomatic cardiac diseases, which can be considered a strength of the current study. However, we are aware that NT-proBNP assays cannot screen cardiac patients perfectly.

This study had some limitations. First, the reference population used to determine hsTnI 99th percentile URLs was smaller than those used in previous similar studies [8, 9]. The number of outliers was relatively high, which reduced the size of the final reference population used to calculate the 99th percentile URLs. It was difficult to include subjects in the reference population as our study was a single-center study, as opposed to multicenter or multinational studies. Second, in the comparison study, we did not use samples covering a wide range of values. In the comparison between Centaur TnI and Centaur hsTnI, samples with values ranging from 0.0 ng/L to 23.5 ng/L were used, which did not cover the entire analytical measurement range of the assays. In comparing NT-proBN values between the Cobas C8000 and Atellica IM systems, there was a gap between 4,100 ng/L and 15,700 ng/L, and thus, our results do not reflect actual assay results obtained in clinical laboratories. Third, we used frozen serum instead of fresh serum for analysis, which may have influenced the study results. Finally, while recruiting the reference population, we did not use imaging modalities, such as cardiac sonography or electrocardiography. Asymptomatic cardiac patients may have been missed, which may have increased the 99th percentile URLs.

We thank Editage (www.editage.co.kr) for editing and reviewing the English language translation of this manuscript. The authors also wish to thank Young Kim and Siemens Healthineers for supporting this project and providing technical assistance.

Ahn S performed the experiments and wrote the paper; Kim HK collected the samples; Lee W revised the paper; Min WK and Chun S designed the study. All authors have accepted responsibility for the entire content of the manuscript and have approved its submission.