Background: von Hippel–Lindau (VHL) disease is an autosomal dominant disorder caused by variants of the VHL tumor suppressor gene (VHL). Early detection and treatment are essential to prevent morbidity and mortality. We evaluated the effectiveness of surveillance strategies and the utility of a VHL clinic with a multidisciplinary team for the first time in Korea.
Methods: The VHL clinic was organized at the Samsung Medical Center in 2011 and consisted of a multidisciplinary team, including an endocrinologist, urologist, general surgeon, neurosurgeon, ophthalmologist, otolaryngologist, and radiologist. Biochemical and imaging surveillance and personalized genetic counseling were conducted at the VHL clinic and patients were referred to the necessary departments upon detection of disease manifestation. We divided the patients in three groups (I–III) based on their compliance to VHL clinic attendance.
Results: Between 2011 and 2018, 50 VHL patients were identified by VHL molecular analysis and referred to the VHL clinic. Most patients regularly participated in imaging of the central nervous system (43/50, 86.0%) and of the abdomen (46/50, 92.0%). However, there were differences in compliance to determination of the catecholamine level, audiometry, and ophthalmic examination among the three groups.
Conclusions: We present the results of using a multidisciplinary team approach and showed that the VHL clinic strategy is useful for the comprehensive surveillance and management of VHL disease. We hope that VHL clinics will be widely set up in hospitals to improve prognosis in patients with VHL.

von Hippel–Lindau (VHL) disease is a multisystem cancer syndrome that is caused by variants of the VHL tumor suppressor gene () located on the short arm of chromosome 3 [1]. encodes pVHL, a tumor suppressor protein that plays an important role in the regulation of hypoxia through the transcription factor, hypoxia-inducible factor (HIF) [2, 3]. In patients with VHL disease, multiple and/or bilateral tumors develop at a relatively young age and affect the central nervous system (CNS), kidneys, adrenals, pancreas, and reproductive organs [4, 5]. Although these tumors are benign, with the exception of renal cell carcinoma (RCC), VHL patients have the lowest life expectancy compared with patients with other tumor syndromes, such as neurofibromatosis and familial adenomatous polyposis [6]. The most frequent causes of VHL-related death are metastasized RCC and neurological damage due to CNS lesions [7-9]. Although several promising treatments for VHL disease are available, early detection of tumors is the first priority to manage the disease and has been shown to reduce the frequency of complications and mortality [6, 9-12].

There are a few reports on how VHL disease is managed according to current guidelines, such as the VHL Alliance guidelines [13], but most of these studies have been performed in western populations [7, 9, 14].

We report comprehensive clinical characteristics of Korean VHL disease patients, including age of onset and incidence rate of manifestations, and correlate these with variant types. We set up a VHL clinic for VHL surveillance and genetic counseling and compared long-term data between VHL clinic participants and non-participants. To the best of our knowledge, this is the first study to present the clinical characteristics of VHL patients with surveillance performance rates that demonstrate the usefulness of a VHL clinic with integrated VHL-related departments to conduct surveillance and genetic counseling, in an Asian population.

Between May 2011 and May 2018, 54 patients attended the VHL clinic and were diagnosed as having VHL disease based on clinical diagnostic criteria of the Samsung Medical Center (SMC; Seoul, Korea) [1, 15]. Among the 54 patients, two patients passed away due to RCC-associated complications and two patients moved to another center during the study period. For the remaining 50 VHL patients, medical records were reviewed retrospectively. Clinical characteristics, including frequency of each manifestation, age at onset of each manifestation, rate of first onset of each manifestation, and genotype–phenotype correlations, were reviewed and molecular study results were collected after obtaining informed consent. The levels of hormones, such as catecholamine and metanephrine, were evaluated using plasma and urine (spot and/or 24-hour urine) tests.

Each clinical manifestation was categorized based on location as either CNS- or visceral organ-related manifestation. CNS lesions include retinal hemangioblastoma (R-HB), endolymphatic sac tumors (ELSTs), and craniospinal hemangioblastoma (CS-HB). All hemangioblastomas (HBs) located in the cerebral cortex, cerebellum, brainstem, or spinal cord were counted as CS-HBs. Other lesions, except CNS lesions, were included as visceral organ manifestations, including RCC, pancreatic neuroendocrine tumor (PNET), and epididymal cystadenoma. Clinical phenotypes were classified as type 1 or type 2 based on the presence of pheochromocytoma (PCC) [5, 16]. To monitor VHL surveillance, we classified the patients into three groups: group 1, patients who attended the VHL clinic once a year; group 2, patients who attended the VHL clinic once, but did not participate in annual follow-ups; and group 3, patients who were not registered at the VHL clinic, but who visited only the specialists relevant to their clinical manifestations. For patients in group 3, medical records and test results were retrieved through interdepartmental cooperation. The study protocol was approved by the SMC Ethics Review Committee (Institutional Review Board no. 2019-09-072).

Organization of the VHL clinic and surveillance program

We recruited a multidisciplinary team, including an endocrinologist, urologist, general surgeon, neurosurgeon, ophthalmologist, otolaryngologist, and radiologist. In the VHL clinic, we performed molecular analysis and executed surveillance with genetic counseling as per the VHL surveillance guidelines of the SMC. The VHL surveillance guidelines of the SMC include recommendations from the US National Institutes of Health and the Danish VHL Coordination Group [1, 9]. The surveillance comprised the following five major procedures: ophthalmic examination; CNS imaging using computed tomography (CT) or magnetic resonance imaging (MRI); CT, MRI or ultrasonography (US) of the abdomen; determination of catecholamine, metanephrine, nor-metanephrine, and vanillylmandelic acid (VMA) levels in 24 hour-collected urine or plasma; and an audiometry test. Each surveillance procedure was recommended to be performed yearly, beginning at the age of 15 years.

When new clinical manifestations of VHL disease were identified during surveillance, the patient was referred to the appropriate specialist (Fig. 1). Genetic counseling included educating the patient on VHL disease, including inheritance patterns, risk to offspring, and importance of surveillance, and recommendations for VHL screening of other family members. 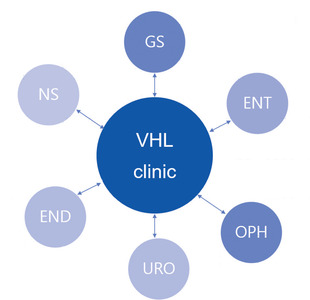 Data are expressed as number, percentage, median, or range and were analyzed using MedCalc version 15.5 (MedCalc, Ostend, Belgium) and Microsoft Excel 2010 (Microsoft, Redmond, WA, USA). To compare surveillance attendance, group 1 was considered the main analysis group and comparisons with groups 2 and 3 were made using the Fisher’s exact test. All reported -values are two-tailed and <0.05 was considered significant.

Missense variants were the most common variant type, followed by splicing variants in both the type 1 and type 2 groups (Fig. 2). Nonsense variants and small insertions/deletions were not observed in VHL type 2, although one large deletion was found. Approximately 16% of the variants were large deletions that required MLPA analysis. Our findings were consistent with those reported in previous studies on variant frequencies or genotype–phenotype correlations in Asian populations [18-21]. 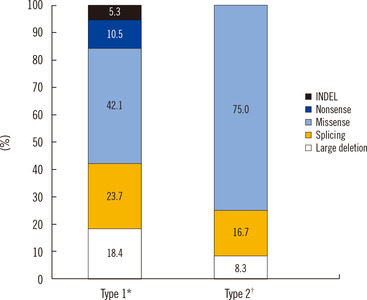 We assessed the performance rate of each surveillance test category (Fig. 3). Fifty percent of the patients (25/50) had registered at the VHL clinic. In group 1, all surveillance tests, except the audiometry test (94.4%, 17/18), were conducted once every 12 months (median; range: 2–48 months) (Supplemental Data Table S1). In group 2, catecholamine level determination and ophthalmic examination were conducted less frequently than in group 1 (71.4%, 5/7 vs. 100%, 18/18), although the difference was not significant (=0.012). The performance rate of the audiometry test was lower in group 2 than in group 1 (94.4% vs. 42.9%, <0.001). In group 3, the performance rates of the other surveillance tests were notably lower than those in group 1. Genetic counseling aimed at educating VHL patients regarding the inheritance patterns of VHL disease and recommendations for genetic tests for other family members were conducted in only 36% (9/25) of the patients in group 3. 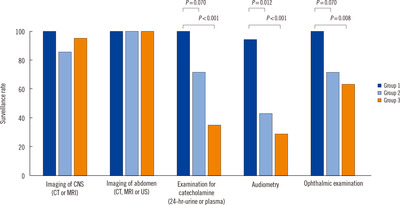 We reviewed the clinical characteristics of VHL disease and the performance rate of VHL surveillance attendance in a Korean population. Although clinical characteristics, such as the frequency of manifestations in patients and age at disease onset, were not distinctively different from those reported in other studies, RCC manifested more frequently than reported in other studies and the age at onset of CS-HB and RCC was lower than in other studied population groups [5, 9, 14, 16]. Most patients with CS-HB (69.6%, 16/23) or R-HB (77.8%, 7/9) as a first manifestation were symptomatic, which led to the first surveillance. In contrast, patients with visceral organ lesions, such as RCC (0%, 0/9), PCC (16.7%, 1/6), and PNET (0%, 0/2), were asymptomatic when these characteristics were observed as a first manifestation.

In most cases, visceral tumors, including RCC (94.5%, 34/36), PCC (80.0%, 12/15), and PNET (90.5%, 19/21), were diagnosed incidentally during surveillance. Therefore, regular surveillance according to the VHL Alliance guidelines is important for the early detection of VHL and especially, visceral organ lesions [13]. Both physicians and patients need to be aware of the possibility of asymptomatic manifestations and, in their own best interest, patients should allow the surveillance of visceral organs, such as the kidneys, adrenal glands, and pancreas.

Like patients in the VHL clinic participant group (group 1), patients in groups 2 and 3, who did not continue yearly follow-ups or did not enroll at the clinic, respectively, regularly received CNS imaging by CT or MRI as well as imaging of the abdomen by CT, MRI, or US (100% vs. 85.7% and 76.0%, respectively). These results show that the patients adhered well to scheduled inspections. However, the performance rates of ophthalmic examination, determination of pheochromocytoma-related hormones (catecholamine, metanephrine, nor-metanephrine, and VMA), and audiometry test were significantly lower in groups 2 and 3. These results suggest that patients do not come to the hospital on a regular basis when they do not experience symptoms.

Only nine patients in group 3 (36.0%, 9/25) received genetic counseling on the importance of surveillance and recommendations for the screening of other family members. Regardless of participation in the VHL clinic, the surveillance interval was not significantly different among patients if they had received each category of surveillance (Supplemental Data Table S1). This implies that physicians tend to be concerned only about their own specialty and that patients only visit the departments relevant to their symptoms. Patients received genetic counseling and were educated on the importance of surveillance if they visited the VHL clinic once, even if they did not participate in annual follow-ups at the VHL clinic. This may explain why no significant differences in the surveillance test performance rates were observed, except for the audiometry test, in patients who attended the VHL clinic, but did not participate in annual follow-ups.

Phenotypic heterogeneity is a hallmark of VHL disease; even within a family harboring the same variant, symptoms are variable [15]. Therefore, comprehensive multidisciplinary surveillance of multiple organs is required to screen for clinical manifestations associated with VHL disease. Surveillance guidelines for VHL disease have been recommended by several VHL study groups [1, 22, 23]. In addition, VHL is inheritable in an autosomal dominant manner and genetic counseling, including education on the inheritance pattern, potential risk to offspring, and reproductive options with family investigation, is required for VHL patients [16]. Although surveillance with genetic counseling is important to detect and manage VHL disease, it is challenging for a physician to conduct all surveillance measures in a timely manner while also providing the patient with comprehensive education [16]. In this respect, a VHL clinic with a multidisciplinary team is extremely useful for conducting comprehensive surveillance for VHL patients. VHL patients require lifelong, continuous management, which can be achieved in a single-center clinic with the multidisciplinary approach suggested here.

The authors have no conflicts of interest to declare.

This work was supported by the National Research Foundation of Korea (NRF) grant funded by the Korea government (MSIT) (NRF-2019R1A2C2002177).