is a filamentous basidiomycete first reported as a human pathogen in 1971 [1]. Its anamorph form, Coprinopsis cinerea, grows in the fecal material of cows and horses. A few cases of serious infections have been documented in immunocompromised patients, making it an opportunistic pathogen [2-6]. Although molecular diagnostic tools have been applied to identify infections, directly performing DNA sequencing on culture-negative tissues is rare [7, 8]. Here, we described a case of invasive pulmonary infection and the usefulness of DNA sequencing performed on culture-negative specimens to identify the rare fungal pathogen. The study was approved by the Institutional Review Board of Samsung Medical Center, Seoul, Korea (approval number: 2021-06-202), and the requirement of informed consent was waived.

A 13-year-old female with relapsed T-cell acute lymphoblastic leukemia (T-ALL) was admitted to the pediatric hematology department of Samsung Medical Center in August 2020 to receive chemotherapy for five days. She was diagnosed as having T-ALL two years earlier and had received allogeneic peripheral blood stem cell transplantation twice. The leukemia relapsed four months after the second transplantation; She underwent chemotherapy, including clofarabine, cytarabine, cyclophosphamide, and etoposide, soon after admission. On day 17, the patient developed neutropenic fever with a temperature of 38.3°C, C-reactive protein level of 220.4 mg/L (reference range, 0–5.0 mg/L), and absolute neutrophil count of 0.0×109/L. Three pairs of aerobic and anaerobic blood cultures were collected, and an empirical antibiotic therapy was initiated with meropenem and teicoplanin (105 mg/kg/day and 9 mg/kg/day, respectively). The antibiotic drugs were later switched to vancomycin (60 mg/kg/day) when the methicillin-resistant was detected in the blood culture. Empiric antifungal agent caspofungin (1.2 mg/kg/day) was administered for the persistent neutropenic fever.

On day 30, the patient developed chest pain in the right axillary area. A chest x-ray showed an opaque lesion in the right middle lung field, and a computed tomography (CT) scan revealed a dense consolidation in the pleura of the right lobe and anterior chest wall, suggesting an invasive fungal infection (Fig. 1). 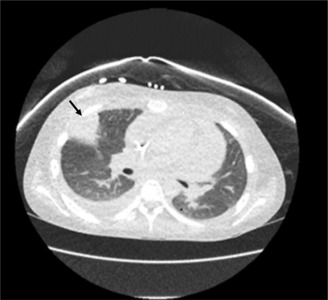 As mucormycosis was suspected based on the CT scan, liposomal amphotericin B, instead of caspofungin, was administered. Biopsy of the infected lung tissue was performed, and the microscopic examination of the lung tissue revealed the presence of septate hyphae with multi-branching (Fig. 2). 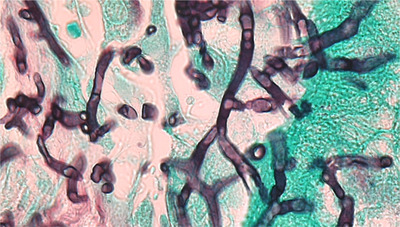 Microbial cultures and ribosomal DNA (rDNA) targeted sequencing were performed on the lung tissue and pleural fluid specimens collected on day 33. Cultures on Sabouraud dextrose agar plates incubated for three weeks remained negative. We extracted genomic DNA from the lung tissue and pleural fluid specimens and performed Sanger sequencing of the D1/D2 and internal transcribed spacer (ITS) regions of the 28S subunit. The D1/D2 region was amplified for both specimens, but amplification of the ITS region was only observed for the lung tissue specimen. On comparing the sequencing results against the GenBank database using the basic local alignment search tool (https://blast.ncbi.nlm.nih.gov/Blast.cgi) algorithm, the D1/D2 sequences of both specimens exhibited 100% identity (563/563 bp) to those of CBS 519.91 and (GenBank accession no. MH873955.1). , the second-matched strain, exhibited 99.1% similarity (558/563 bp). The ITS sequence of the lung tissue was most closely related to that of CBS 519.91 with 99.5% identity (221/222 bp). Voriconazole was added to the treatment regimen as soon as the species was identified, as successful treatment with voriconazole has been reported in a few cases [8]. Neutrophils donated by her father were infused once every week for five weeks. Despite liposomal amphotericin B and voriconazole treatment, the fungal infection could not be controlled, and the patient died three weeks later.

is a rare fungal pathogen that may cause life-threatening infections, particularly in populations with hematologic malignancies [3]. We have described a case wherein was identified from culture-negative lung tissue and pleural fluid specimens. To the best of our knowledge, this is the first reported case of invasive infection in Korea. Direct DNA sequencing using a fresh specimen may be useful, especially when the culture remains sterile. have rarely undergone molecular identification from culture-negative specimens [7, 8]. Negative fungal cultures may be attributed to the use of antifungal agent prior to the microbial cultures, although it is unclear whether caspofungin had antifungal activity against in this case. Many filamentous basidiomycete fungi isolates are sterile in the clinical laboratory, and the lack of key morphologic features, such as sporulation, can further make the identification of the pathogen challenging under microscopic examination [9, 10]. In our case, the histopathological diagnosis was abscess, based on the microscopic examination of the lung biopsy specimen that revealed fungal infiltration with narrow septate hyphae and multiple branching. The accurate identification of the pathogen, however, was possible using rDNA sequencing.

In conclusion, invasive infections are uncommon and can be fatal. The present case highlighted the usefulness and accuracy of direct DNA sequencing, using a fresh specimen, in identifying the fungal pathogen.

Huh HJ conceived and designed the study. Chong E, Yu H, Kim TY, and Huh HJ analyzed the data. Chong E wrote the manuscript. Yoo KH, Kim Y, and Lee NY reviewed the manuscript. All authors have accepted their responsibilities for the entire content of this manuscript and approved submission.