Next-generation sequencing (NGS) is widely used in clinical genetic diagnosis and provides large amounts of genetic information. Efforts have to be made to interpret unrevealed variants simultaneously [1]. Besides the ±1, 2 canonical regions, many variants in introns are interpreted as “variants of uncertain significance” (VUS) because of insufficient evidence of their clinical significance [1]. The best way to confirm variant pathogenicity is RNA sequencing, which can provide evidence of RNA splicing by intronic variants [1, 2]. Using RNA sequencing, we confirmed that a novel intronic variant (c.314+3A>T) in induces exon 3 skipping; this case demonstrates the significance of confirming RNA splicing, especially when intronic variants are detected in splice site consensus sequences (ssCSs) [1].

A 41-year-old female patient with a family history of hypertension and paraganglioma was diagnosed as having right carotid paraganglioma in 2001. Multifocal metastases had developed for 21 years. After obtaining informed consent for genetic testing, we performed an NGS hereditary cancer panel testing in 2021 using a MiSeqDx instrument (Illumina, San Diego, CA, USA) and a target enrichment kit (Dxome, Seongnam, Korea). The mean coverage depth was 384.0×. In total, 310 likely benign/benign variants and a single VUS in (NM_003002.3: c.314+3A>T, heterozygous) were detected (Fig. 1). 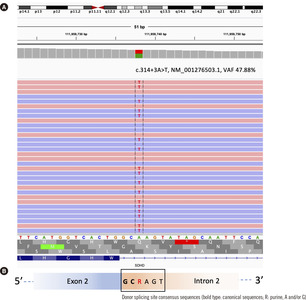 Figure 1. Representations of genomic alterations in identified by NGS hereditary cancer panel test (A) Integrative Genomics Viewer (Broad Institute and the Regents of the University of California, https://software.broadinstitute.org/software/igv/home) snapshot of the c.314+3 A>T variant in (Chr11:111959738, hg19), with a VAF of 47.88%. (B) Schematic diagram of the donor ssCS in exon 2 in .
Abbreviations: NGS, Next generation sequencing; ssCS, splice site consensus sequence; VAF, variant allele frequency.

The VUS has not been detected in the normal population (Genome Aggregation Database; not reported, PM2) and is not reported in ClinVar, the Human Gene Mutation Database, and other databases. Using the splicing computational tool Splicing Site Finder-like (change threshold of –5% at donor sites), this variant had a negative score (–13.6%), indicating disturbance of normal splicing binding at the donor site (c.314G). The conservation scores in PhastCons (1.0; range, 0–1.0) and GERP (1.0; range, 0–1.0) for the variant were very high.

Exon 3 was skipped in the patient, causing a 145-nucleotide deletion in exon 3 (r.170_314del) (Fig. 2). This caused a frame shift (p.Ser57TrpfsTer30) that was strongly predicted to have a loss-of-function effect in . The variant was reclassified as a likely pathogenic variant (PM2, PS3) [3]. 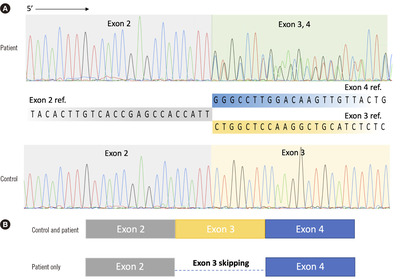 The variant c.314+3A>T is detected in highly conserved donor ssCSs recognized by the spliceosomal U1-snRNA complex for splicing (Fig. 1) [4, 5]. Canonical sites at this exon–intron junction have GC sequences (U2 type) instead of the predominant GT sequences at donor splicing sites (U1 type; 5´-GTRAGT-3´, where R is a purine [A and/or G]), and interact with the spliceosomal U1-snRNA, similar to U1-type sequences [6]. This nucleotide alteration from a purine to pyrimidine is presumed to cause exon skipping due to inappropriate donor splice site recognition. Disease-causing spliceogenic variants are reported in canonical sites and adjacent ssCSs of several hereditary cancer genes [1, 2, 7-10]. This suggests the importance of the functional interpretation of intronic variants that cause RNA splicing changes in hereditary cancers. The frequency of intronic variants affecting RNA splicing confirmed by RNA sequencing near acceptor sites, and especially donor sites, is high [1]. RNA sequencing of these sites could reveal valuable information to confirm the pathogenicity of such variants.

The authors have no conflict of interest to declare.