Prostate cancer is common worldwide and is the fourth most common cancer in Korean men [1]. Although the exact cause of prostate cancer is unknown, its incidence is higher among certain ethnicities, in the elderly, and in individuals with a family history [2]. Inherited variants in several DNA repair genes, including , , , and , were recently associated with responses to poly (ADP-ribose) polymerase (PARP) inhibition in prostate, ovarian, and breast cancers [3]. Loss of function of these genes is associated with more aggressive prostate cancer, and a clinical trial on the PARP inhibitor olaparib for metastatic prostate cancer is ongoing [3]. CHEK2 is a tumor suppressor that plays an important role in genome integrity and the cellular response to DNA damage through the phosphorylation of several substrates, including BRCA1 and TP53 [4, 5]. is currently included in many next-generation sequencing (NGS) panels targeting various hereditary cancers, and new studies are continually being published. We identified a novel splice variant of by NGS and confirmed its impact on splicing by RNA sequencing.

In 2021, a 70-year-old man undergoing chemotherapy for metastatic prostate cancer without a known family history showed a continuous increase in prostate-specific antigen (PSA). After obtaining informed consent, NGS was performed for 171 hereditary tumor-related genes for further evaluation and management at Asan Medical Center, Seoul, Korea. Genetic testing was performed as a clinical laboratory test and not with a research objective; approval from the Institutional Review Board was exempted. Genomic DNA was extracted from peripheral blood leukocytes using a customized target enrichment kit (Dxome, Seongnam, Korea), and NGS was conducted on a MiSeqDx instrument (Illumina, San Diego, CA, USA) using a MiSeqDx V2 sequencing kit (Illumina).

The mean coverage depth was 554.2×. Except for one intronic variant in , 256 variants were predicted to be benign or likely benign. The suspected variant, NM_007194.4 (): c.1009-7T>G, was heterozygous, with a variant allele frequency of 50.2% (Fig. 1). This variant has conflicting interpretations of pathogenicity in ClinVar but is not reported in the Human Gene Mutation Database. According to the 2015 American College of Medical Genetics (ACMG) guidelines, given its rarity in the general population, only a designation of PM2 (absent from controls) could be applied to the variant [6]. In splice-site prediction, the Database of Splicing Consensus Single-Nucleotide Variants adaptive boosting score was 0.387, and the random forest score was 0.288. In NetGene2-based splice-site prediction, the possibility of a splicing change was predicted to be low; thus, the designation of PP3 (multiple lines of computational evidence supporting a deleterious effect of the gene) was not applicable [7]. The variant was classified as a variant of uncertain significance (VUS) [6]. 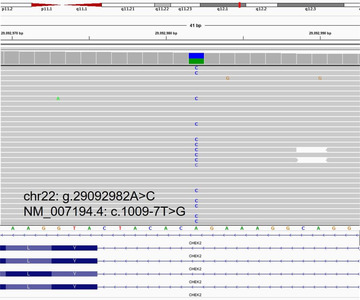 Figure 1. Next-generation sequencing revealed a variant of , involving a substitution of thymine (T) for guanine (G) at the intron located –7 from the acceptor site (c.1009T>G).

Given the implication of in prostate cancer and the variant being located close to the splicing acceptor site, RNA sequencing was performed to confirm the impact of the variant at the RNA level. RNA was extracted from leukocytes of a healthy volunteer and the patient using High Pure RNA Isolation Kit (Roche, Indianapolis, IN, USA) and reverse-transcribed using the RevertAid First Strand cDNA Synthesis kit (Thermo Fisher Scientific, Waltham, MA, USA). Exon 10 skipping with an 87-bp deletion was detected in the patient. This variant, represented as NM_007194.4():c.1009_1095del (Fig. 2), has not been reported previously. The in-frame deletion is in a non-repeat region that changes the protein length; thus, the designation of PM4 could be applied [6]. ACMG standards do not provide detailed guidance on how functional evidence should be evaluated for a PS3 classification (functional studies supportive of a damaging effect on the gene or gene product); thus, application to the in-frame deletion may be controversial [8]. No deletions in exon 10 are reported in current disease databases. Exon 10 encodes an ATP-binding site located in the kinase domain of CHEK2, as reported in UniProt. As this site plays a critical role in the kinase function of CHEK2, the deletion in exon 10 may affect protein function [9]. PM1 (critical and well-established functional domain) may be additionally applied, which leads to reclassification of the variant as “likely pathogenic” [6]. We recommended additional NGS testing to the patient’s family members, which have not yet been conducted. 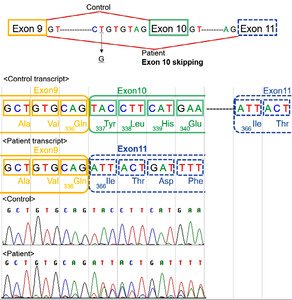 As clinical sequencing is mostly performed at the DNA level, disease-causing splicing variants may be underestimated [10]. The presence of numerous VUS compromises a precise assessment of the risk associated with particular tumor types [9]. RNA sequencing was performed to find evidence of PS3 in a suspected splice variant, which confirmed an in-frame deletion caused by exon 10 skipping. The VUS was reclassified as PM1 and PM4, rather than PS3. RNA sequencing should be more actively considered to provide additional evidence for the determination of pathogenicity categories other than PS3.

Na R wrote the manuscript. Lee J managed the patient and provided the clinical information. Hong J, Gu H, Lee W, and Min W contributed to the interpretation of the results, and the writing and revision of the manuscript.

No potential conflicts of interest relevant to this paper are reported.