Hemophagocytic lymphohistiocytosis (HLH) is a systemic hyperinflammatory syndrome characterized by fever, hepatosplenomegaly, cytopenia, hypertriglyceridemia, and hypofibrinogenemia [1]. HLH can be divided into primary and secondary HLH. Primary HLH occurs mainly in children often as a result of genetic predisposition, whereas secondary HLH occurs mainly in adults and is commonly triggered by viral/bacterial infections or malignancy [2]. For patients with childhood-onset HLH, genetic testing is useful, as the accompanying symptoms depend on the genes involved. Griscelli syndrome (GS) was first reported in 1978 in a patient with partial albinism with immunodeficiency and is divided into three subtypes [3]. While partial albinism is a common finding in all three subtypes, HLH is notably characterized by GS type 2 (GS2), caused by a variant of . We report the first case of a Korean patient with GS2. This study was approved by the Institutional Review Board of Seoul National University Hospital (SNUH), Seoul, Korea (approval number: 2107-172-1236), and informed consent for genetic testing was obtained from the patient’s parents.

A one-month-old boy was transferred to SNUH because of progressive cytopenia in April 2021. A complete blood count (CBC) revealed a Hb level of 77 g/L, absolute neutrophil count (ANC) of 2,545×106/L, and platelet count of 81×109/L. As a granulocyte colony-stimulating factor was used right before the transfer to our hospital, the ANC appeared to be normal. However, two days after the transfer, the ANC decreased to 1,065×106/L. The patient was the first child, and his parents had no family history of hematologic disorders. There had been no perinatal problems during pregnancy, except fetal ascites, confirmed by ultrasound, at a gestational age of 37 weeks. After birth, fetal hydrops, including pleural effusion, subcutaneous edema, ascites, and systemic petechia were observed. CBC performed at that time revealed pancytopenia. Maternal screening test results for toxoplasmosis, rubella, cytomegalovirus, herpes simplex virus, and parvovirus performed right after childbirth were negative. Bacterial culture and viral infection tests of the patient were negative. Conservative treatments, including transfusion and granulocyte colony-stimulating factors, were administered, but cytopenia gradually progressed. On physical examination, the patient was found to have silvery-gray hair and hepatosplenomegaly. IgG, IgA, and IgM levels were normal. Hypofibrinogenemia (129 mg/dL; reference interval, 192–411 mg/dL), hyperferritinemia (3,557.41 mg/dL; reference interval, 21.8–274.7 mg/dL), and elevated IL-2 receptor level (5,465 U/mL; reference interval, 158–623 U/mL) were confirmed. Hemophagocytic histiocytes were observed on the bone marrow aspirate smear (Fig. 1A, B). The overall results were consistent with HLH, according to the revised HLH-2004 diagnostic criteria [1]. The patient was started on dexamethasone and cyclosporine treatment. Simultaneously, we performed a gene panel testing, which revealed two splice site variants in (Fig. 1C, D): NM_004580.4 (RAB27A):c.467+5G>A, with a variant allele frequency (VAF) of 49.81%, and NM_004580.4(RAB27A):c.343+2T>C, with a VAF of 52.68%. 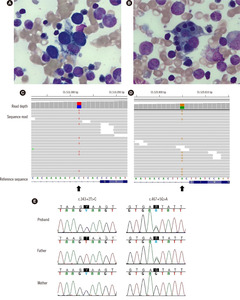 We assessed both variants as likely pathogenic based on the 2015 American College of Medical Genetics and Genomics and the Association for Molecular Pathology guidelines [4]. These variants are absent from controls in large population databases, such as gnomAD (https://gnomad.broadinstitute.org/) and the Korean Reference Genome Database (http://coda.nih.go.kr/coda/KRGDB/). The novel variant c.343+2T>C, located in the splice donor site, was predicted to interfere with mRNA splicing by a splicing prediction algorithm. We applied PM2 and PVS1 as evidence of pathogenicity. The other variant, c.467+5G>A, resulted in the skipping of exon 5 in a previous study [5]. Thus, we assessed this variant as likely pathogenic based on PM2, PS3, and PP5. Heterozygosity was confirmed by Sanger sequencing DNA samples from the parents (Fig. 1E). No variants were found in other HLH or pigmentary disorder-associated genes in the panel, including , , , , , and . The patient’s CBC profile steadily improved, and he has been in good condition for more than seven months now. The patient is undergoing regular follow-up, and a stem cell transplantation is planned in a few months.

RAB27A is a member of the small GTPase family and is expressed in various cells, including melanocytes and lymphocytes [6]. Specific changes caused by an variant lead to inhibition of the melanosome transport process and eventually cause pigmentary dilution, a characteristic of GS2 [7-9]. RAB27A is also involved in cytotoxic granule exocytosis through binding with specific effectors, leading to immune impairment and predisposition to HLH [8]. However, not all patients with the variant develop both symptoms. Specific variant selectively impairs only the RAB27A–MUNC13-4 interaction and does not affect the RAB27A–MLPH/SLAC2-A interaction, leading to immune abnormalities but normal pigmentation [7]. The effects on leukocytes and melanocytes vary depending on the transcription start sites, resulting in normal pigmentation in some cases (Table 1) [7]. Even with the same homozygous missense variant, phenotypic variability has been reported [10].

Table 1 . Genetic and clinical characteristics of patients with variants

We present a GS2 case with splice site variants. One novel variant, c.343+2T>C, and one reported variant, c.467+5G>A, were identified. The previously reported case presented with neurological symptoms, graying hair, and no signs of immunodeficiency. These results are closely related to GS type 1 rather than GS2 [5]. However, an homozygous variant, c.467+5G>A, was confirmed by Sanger sequencing and was predicted to result in a premature termination codon (p.Ser115Lysfs*15). In this case, the patient had silvery-gray hair and was diagnosed as having HLH, consistent with the classic GS2 phenotype. These phenotypic differences can be attributed to the location of the transcription start site. However, the underlying mechanism was not confirmed in the present study.

Seong MW and Lee Y designed the study and wrote the manuscript. Kang HJ, Ko JM, Chang YH, and Kim HK reviewed the medical records of the patient. Park HJ, Kim B, and Lee JS collected and interpreted the data. Kim MJ, Park SS, and Seong MW contributed to the revision of the manuscript. All authors approved the final manuscript to be published.