Prevalence and Molecular Epidemiology of Extended-Spectrum-β-Lactamase (ESBL)-Producing Escherichia coli From Multiple Sectors of the Swine Industry in Korea: A Korean Nationwide Monitoring Program for a One Health Approach to Combat Antimicrobial Resistance

Background: One health is a flexible concept with many facets, including the environment, community, and the nosocomial super-bacteria resistance network. We investigated the molecular prevalence of extended-spectrum-β-lactamase-producing Escherichia coli (ESBL-EC) in workers, livestock, and the farm environment in Korea.
Methods: ESBL-EC isolates were obtained from samples from 19 swine farms, 35 retail stores, seven slaughterhouses, and 45 related workers throughout Korea from August 2017 to July 2018, using ChromID ESBL (BioMérieux, Marcy l’Etoile, France) agar and enrichment broth. The presence of ESBL and mobilized colistin resistance (mcr) genes and antimicrobial resistance were determined. Clonality was evaluated with pulsed-field gel electrophoresis (PFGE) and multilocus sequence typing (MLST).
Results: In total, 232 ESBL-EC isolates were obtained from 1,614 non-duplicated samples (14.4% positive rate). The ESBL-EC isolates showed regional and source-related differences. blaCTX-M-55 (N=100), blaCTX-M-14 (N=65), blaCTX-M-15 (N=33), and blaCTX-M-65 (N=23) were common ESBL types. The ESBL-EC isolates showed high resistance rates for various antimicrobial classes; however, all isolates were susceptible to carbapenem. One swine-originating colistin-resistant isolate did not carry any known mcr gene. PFGE was successful for 197 of the 232 isolates, and most PFGE types were heterogeneous, except for some dominant PFGE types (O, R, T, U, and V). MLST of 88 isolates was performed for representative PFGE types; however, no dominant sequence type was observed.
Conclusions: The proportion of ESBL-EC in swine industry-related samples was significant, and the isolates harbored common clinical ESBL gene types. These molecular epidemiologic data could provide important evidence for antimicrobial-resistance control through a one health approach.

Antimicrobial resistance (AMR) is a major challenge that requires multi-sectional efforts, such as those relating to human and veterinary medicine, agricultural sciences, epidemiology, and economics [1]. One health is a broad and flexible concept with various facets, such as the environment, community, and nosocomial super-bacteria AMR network [2]. Bacteria from livestock may be carriers of clinically relevant resistance genes for veterinary and human antimicrobials. The exposure to multidrug-resistant bacteria during farming, slaughtering, and distribution may cause transmission to occupationally exposed workers. Therefore, elucidating the current epidemiology and transmission mode of antimicrobial resistant bacteria among humans, animals, and environments is very important to establish an effective strategy for the controlling AMR.

Although a recent domestic study reported the isolation of CTX-M-55 or CTX-M-65-producing from duck fecal and carcass samples [3], limited information is available on the current molecular epidemiology of extended-spectrum-βlactamase (ESBL)-producing (ESBL-EC) in the Korean veterinary sector. This information on ESBL-EC among workers, livestock, animal products, and farm environment would be useful for identifying sources of AMR.

A study was launched in 2017 with support from the Korea Centers for Disease Control and Prevention wherein we evaluated the prevalence of third generation-cephalosporinand colistin-resistant in workers, animals (swine, cows, and chickens), and farm environments. This study aimed to provide information on how the AMR transmission mechanisms among the three sectors (human-animal-environment) could be used to introduce a monitoring system and develop an effective control strategy This is the first study to evaluate the current molecular epidemiology of AMR and cover all steps, from production to sales, in the swine industry.

A total of 1,614 non-duplicated samples were prospectively collected from 19 swine farms, 35 retail stores, and seven slaughterhouses in five administrative districts throughout Korea from August 2017 to July 2018. The samples included swabs from the following: nose, skin (groin region), rectum, and stool of swine; a pigsty fence, floor, and ventilation fan and soil surrounding a pigsty; pooled human stool in a toilet; knives, cutting boards, and slaughterhouse floor. Additionally, 0.5–1 L of livestock wastewater was collected; 10 g of pork meat was sampled in the slaughterhouses. Pork for sale, knives, cutting boards, and showcases in retail stores were also sampled using a swab. We also obtained swab samples from the nose, groin, axillary, antecubital fossa, inter-finger spaces (both hands), and stool of 45 workers after obtaining written informed consent.

The feces of livestock and workers were collected in stool boxes, and the soil was collected in sterilized bags. Swabbed samples were collected with sterilized cotton swabs and put into a transport medium (Copan diagnostics, Murrieta, CA, USA). Analysis was performed at Research Institute of Bacterial Resistance, Yonsei University College of Medicine. Samples were stored at 4°C before analysis and inoculated in culture media within 24-h of sampling. This study was approved by the Institutional Review Board of National Health Insurance Service Ilsan Hospital, Goyang, Korea (NHIMC 2017-07-041).

The disk diffusion method and broth microdilution (BMD) were performed for testing AMR. Briefly, fresh grown , at a turbidity of 0.5 McFarland standard, was used to swab inoculate the surface of an MH agar plate (Oxoid, Basingstoke, UK). After the plate was allowed to stand for 15 minutes at 20–22°C, antimicrobial disks (Becton Dickinson, Franklin Lakes, NJ, USA) were placed in it and incubated overnight. Tested disks contained ampicillin, piperacillin, ampicillin-sulbactam, cefazolin, cefoxitin, cefepime, cefotaxime, ceftazidime, azteronam, imipenem, meropenem, ertapenem, amikacin, gentamicin, and ciprofloxacin. The inhibition zone diameter was interpreted according to the CLSI criteria [4]. To detect colistin resistant isolates, test organisms were screened on MH agar plate containing colistin (0, 1, 2, and 4 μg/mL) with the ATCC25922 strain. If minimal inhibitory concentration (MIC) was > 2 mg/L, the isolate was regarded as a colistin-resistant organism according to the CLSI breakpoints for and spp., because there are no CLSI breakpoints for Enterobacteriaceae [4].

Pulsed-field gel electrophoresis (PFGE) was performed as described previously [8], and the patterns were analyzed using InfoQuest FP software (Bio-Rad) with stored isolates (-70°C in skim milk). The dendrogram was generated based on the unweighted pair group method, with an arithmetic average from Dice’s coefficient with 1% band position tolerance and 0.5% optimization settings. The sequence types (STs) were determined by multilocus sequence typing (MLST) of representative isolates [9].

For categorical variables (source, province, ESBL type), we used count and percentages of the group from which they were derived. AMR rate was calculated as the percentage of isolates that showed resistance to certain antimicrobials. The relative ratio of ESBL genotypes was defined as the percentage of the total. The prevalence or positive rate of ESBL-EC isolates was derived by comparing the number of samples with ESBL-EC with the total number of samples studied and was expressed as a percentage. Multiple samples from the same swine were calculated as one sample, and the swine was defined to be ESBLpositive even if only one sample from it was positive (nose, skin at groin region, rectum, and stool). Chi-square test was used for the comparative analysis of categorical variables using IBM SPSS Statistics for Windows software version 23.0 (IBM Corp., Armonk, NY, USA). Statistical significance of the results was defined at < 0.05.

The ESBL-EC isolates showed AMR to gentamicin (41.1%), amikacin (51.1%), ciprofloxacin (32.5%), and trimethoprimsulfamethoxazole (57.6%), in addition to β-lactams. All isolates were susceptible to imipenem, meropenem, or ertapenem. The AMR rates differed according to sample source. Isolates from swine showed higher resistance rates for β-lactams, amikacin, gentamicin, and ciprofloxacin than isolates from pork samples (Fig. 1A). 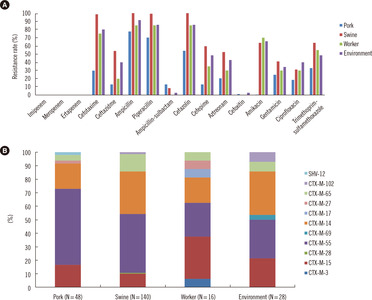 All ESBL-EC isolates contained a single CTX-M type ESBL gene. Common genotypes included (N = 100), CTX-M-14 (N = 65), CTX-M-15 (N = 33), and CTX-M-65 (N = 23). The relative proportion of ESBL-EC isolates indicated some differences in ESBL genotype among swine industry-related isolates, depending on the source (Fig. 1B). However, most of the isolates shared ESBL genotypes common to clinical isolates, such as CTX-M-14, 15, and 55. One swine-originating strain showed a MIC of 4 μg/mL for colistin (according to BMD analysis) but had no genes.

PFGE was successful in 197 of the 232 isolates, and most of PFGE types were heterogeneous (total 105 PFGE types) with some dominant PFGE types (O, R, T, U, and V), which were detected with a cut-off level of 5% (if more than 10 isolates had the same PFGE type). Thirty-five isolates failed to grow in repeated subculture of stored isolates (-70°C in skim milk) or could not be analyzed by repeated PFGE. 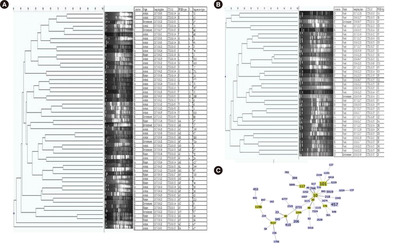 Figure 2. Clonal traits of ESBL-EC. (A) Samples from swine farms, (B) Samples from slaughterhouses or retail houses, (C) The minimum spanning tree was constructed using the goeBURST algorithm, with the Phyloviz software v2.0 (http://www.phyloviz.net/). The allelic profiles were downloaded from the MLST website (http://pubmlst.org/escherichia/), which included the STs. The Group founder is colored in green, and the related STs are in blue.
Abbreviations: ESBL, extended-spectrum-β-lactamase; ESBL-EC, extended-spectrum-β-lactamase-producing ; STs, sequence types; MLST, multilocus sequence typing.

The isolation of ESBL-EC with CTX-M variants from livestock is a constant problem [14]. In the present study, the overall positive rate of ESBL-EC was 14.4%, and the ESBL-EC isolates were less frequent in pork (8.9%) and worker (9.0%) samples than in swine (18.4%) and environment (20.6%) samples. The positive rate also varied according to geographic location. For example, 18% of pork samples from Seoul/Gyeonggi had ESBL-EC; which is much higher than in other regions. Common ESBL genotypes included CTX-M-55, CTX-M-14, and CTX-M-15, which are prevalent among ESBL-EC isolated from clinical samples in Korea [15, 16]. This provides indirect evidence of the resistance transfer from swine to workers. However, definite evidence of transfer from swine to workers was not found based on whole genome analysis of four CTX-M-55-carrying isolates highly suspected of dissemination in one swine farm [17]. PFGE types were heterogeneous, except for the some dominant PFGE types (O, R, T, U, and V). MLST types of isolates with representative PFGE types were very heterogeneous, without dominant clones, suggesting sporadic rather than clonal spread in the study groups.

The community prevalence of ESBL increased gradually in the mid-2000s, owing to the wide spread of ST131 with CTXM-15 [18]. The success of this clone might be due to its specific traits, including multidrug resistance, high virulence, and efficient transmission [19]. ST131 isolates have been reported from non-human sources [20, 21]; however, to the best of our knowledge, there have been no reports that have examined ST131 isolates in livestock or companion animals in Korea. ST131 ESBL-EC isolates were not detected in this study, suggesting a low prevalence of ST131 ESBL-EC in swine-related samples in Korea. However, continuous monitoring is needed to prevent the spread of ST131 in the community, considering its competency to capture carbapenemase genes [22].

This study also included the monitoring of carbapenemaseproducing and colistin-resistant in livestock or related industries in Korea; however, we could not detect these isolates in swine-related samples. Although there are several reports regarding carbapenemase-producing (CPE) in livestock [23, 24], including those that co-produce MCR-1 and carbapenemase [23], to the best of our knowledge, no studies examining CPE in livestock have been conducted in Korea. Recently, two New Delhi metallo-β-lactamase (NDM-5)-producing isolates were isolated from a dog and a cat in Korea [25]. The spread of CPE from livestock or the environment to humans is a global public health concern. To date, the prevalence of genes in isolates from livestock has been very low in Korea [26–28].

The limitation of this study is that evidences of the spread of ESBL-EC among workers, livestock, the environment, and slaughterhouses were not documented and the prevalence of ESBLEC in livestock was not evaluated in a longitudinal study. Further studies are needed on samples from swine at various breeding stages.

I thank So Ra Yoon, PhD for the statistics from research Institute of national health insurance Ilsan hospital.

No potential conflicts of interest relevant to this paper were reported.

This study was supported by research funds from the Korea Centers for Disease Control and Prevention (Project No. 2017NER54060 and 2020ER540500).